TOXIC. Oil facilities have been targeted during conflicts since the start of mechanised warfare. It is a practice that can have serious consequences for the environment and human health. Oil fires started by Islamic State in northern Iraq have now been burning for months, exacerbating an already serious humanitarian crisis, but right now nobody seems to be monitoring their impact on the ground.

The oil fires burning in and around the northern Iraqi town of Qayyarah began in July when retreating Islamic State forces ignited wells, storage tanks and a refinery. Fires at facilities on the Alas oil field near Baiji and Tikrit around 100km south east of Qayyarah have been burning since January 2016. In late October, Islamic State also set a sulphur factory alight, leading to 1,000 people requiring medical treatment, and there are fears that industrial facilities in Mosul may also be in their sights.

Many of Qayyarah’s inhabitants have elected to stay in their homes rather than move to displacement camps, meanwhile significant numbers of people fleeing the fighting in Mosul and the wider area have moved towards Qayyarah. People in Qayyarah have reported a range of short-term health problems linked to the smoke and pollution that the fires have caused, particularly respiratory illness. Efforts to tackle the fires are ongoing but have met with limited success so far, with three wells reported to have been extinguished by the UN, while 19 remain on fire. Work has been hampered by the presence of mines and IEDs and in early November, Oxfam became the first aid agency to call on the Iraqi government to extinguish the fires. 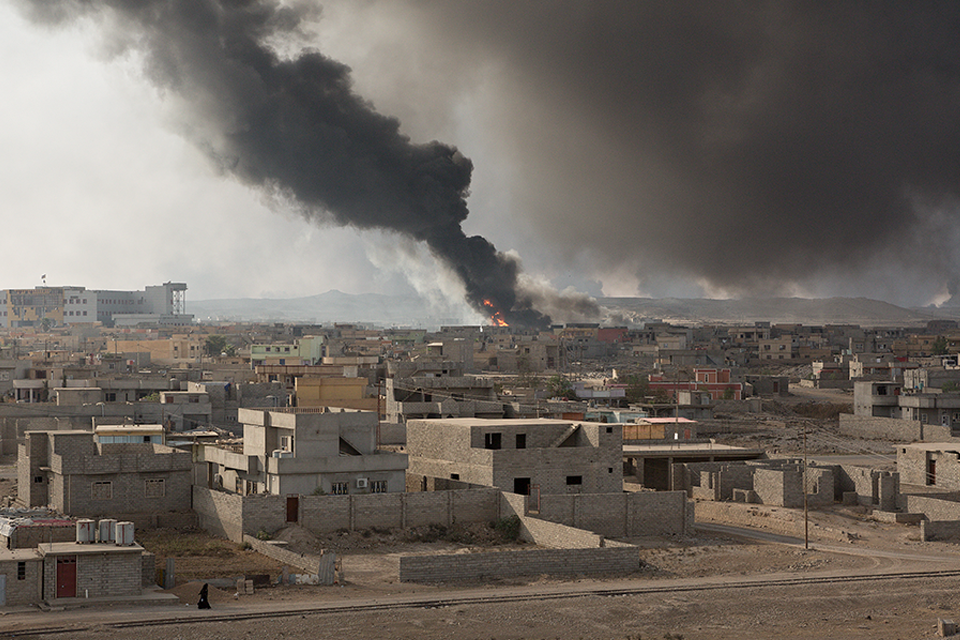 Satellite imaging of the plumes from the fires between July and October by the UN has revealed that an area of around 256 square kilometres have been covered by the smoke plumes for more than 21 days, with a number of towns particularly badly affected. In light of the large numbers of people, and the size of the area affected, environmental and health monitoring is vital. Satellite imaging and modelling are playing an important role in efforts to map areas of concern, but it is no substitute for data collection on the ground.

A rapid assessment published by UN Environment and the Office for the Coordination of Humanitarian Affairs’ Joint Environment Unit (JEU) in early November urged the Iraqi Ministry of Health and Environment, and relevant ministries in neighbouring countries, to begin collecting data from its existing network of air monitoring stations. The assessment also proposed regular health risk assessments for areas affected by the plumes, and the development of a health registry for the exposed population.

Given the slow pace of work to deal with the fires, and the complexity and volatility of the security and humanitarian situation around Qayyarah, it seems inevitable that they will continue to burn well into 2017. And, although the town has seen no shortage of journalists visiting it, environmental experts have been less visible.

The oil field close to Qayyarah produces heavy sour crude – oil rich in sulphur, usually in the form of hydrogen sulphide and, typically, metals such as nickel and vanadium. It is denser and more sulphur rich than the majority of fields across the region. Assessments of the toxic combustion products from crude oil fires have been undertaken, but the precise proportions of the compounds in the smoke plumes vary depending on the composition of oil and the temperature of the fire.

The hazardous substances produced by oil fires include volatile organic compounds (VOCs) such as benzene, carbonyls such as formaldehyde, polycyclic aromatic hydrocarbons (PAHs) like benzopyrenes and naphthalene, as well as dioxins and furans. The fires also release gaseous pollutants such as sulphur dioxide, nitrogen oxides, hydrogen sulphide and carbon monoxide, together with particulate matter at sizes of concern to human health. Particulate matter can act as a vehicle for toxic materials to enter the lungs and the inhalation of high concentrations of particles over long periods can reduce the lungs’ ability to clear themselves.

How the smoke plumes behave is crucial for determining the risks to human health and the environment. In analogous cases, such as the Kuwaiti oil fires in the 1991 Gulf War, atmospheric conditions regularly allowed the plumes to rise to high altitude – often travelling at a height of between two and six kilometres. This was also the case with the 2005 Buncefield oil depot fire in the UK, where an atmospheric temperature inversion luckily prevented the plume from reaching the ground.

Footage from in and around Qayyarah clearly shows a considerable amount of soot deposition and fallout in proximity to the fires and, while this was also the case in Kuwait in 1991, particularly where fires took hold in oil lakes, unlike Qayyarah, the Kuwaiti fires were located away from population centres. With the winter rains already starting, there is significant potential for the deposition of plume material across the region. While any effects will be most pronounced closest to the origin of the plumes, there is potential for widespread soil and water contamination and damage to vegetation.

In light of the seriousness of the humanitarian situation facing the region’s residents, addressing their immediate needs for shelter, health care and sustenance are a priority. Nevertheless, the potential for acute and long-term consequences for human health and the environment from the fires makes work to document their impact vital, and the UN has called for Iraq and its neighbours to also deploy mobile air sampling equipment. However, it’s not clear whether this has been heeded by the Iraqi government.

While the Buncefield fire lasted only days, and not months, the UK’s Health Protection Agency moved swiftly to implement an environmental sampling campaign, collecting and analysing 72 samples from 33 locations by the end of the week. The agency tested for PAHs, dioxins, furans and heavy metals, as well as for toxic fire-fighting foams. They also prepared and circulated a health questionnaire to 5,000 nearby residents to build up a picture of any acute health problems associated with the fire. The questionnaire also served to identify the sources of information that people depended on for health advice – vital data for structuring risk communication programmes.

In the wake of the Kuwaiti fires, the US military were forced by law to establish a registry of exposed troops. This required the development of new methodologies that used satellite imaging and environmental sampling to build up a picture of individual exposures. This was made possible because the movement of military personnel could be tracked with some degree of accuracy – not something that is feasible for the civilian population. Environmental surveillance is now commonplace for deployments, and the US airbase at Qayyarah West is taking hourly air samples to monitorfor pollutants.

Conditions for scientific research will be challenging but with widespread reports of contaminated water sources, agricultural land and the daily threat posed to the town’s inhabitants by air pollution, such work is vital. Building a health registry that can respond to the current needs of all those affected, and ensuring assistance now and in the months and years to come, will likely prove more challenging still. UN agencies have the capacity to assist the Iraqi government should they request it but cannot act without their consent.

The at times ad hoc responses to environmental disasters like these during conflicts are a world away from what is expected during peacetime. For now attention is focused on the immediate humanitarian needs of residents, and of those displaced by the fighting, but for Qayyarah and the wider region, the humanitarian and environmental risks have become inseparable. Data on the extent of the threat the fires pose to human health and the environment must be collected. If the Iraqi government is recording data, it must make this available to humanitarian agencies and researchers. If it lacks the capacity to do so, international assistance must be requested and provided. But above all, the fires must be extinguished.

Doug Weir manages the Toxic Remnants of War Project, the project is on Twitter: @detoxconflict This blog first appeared in The Ecologist. Thank you to Matt Cetti-Roberts of Frontlinepictures.com for the Qayyarah image.