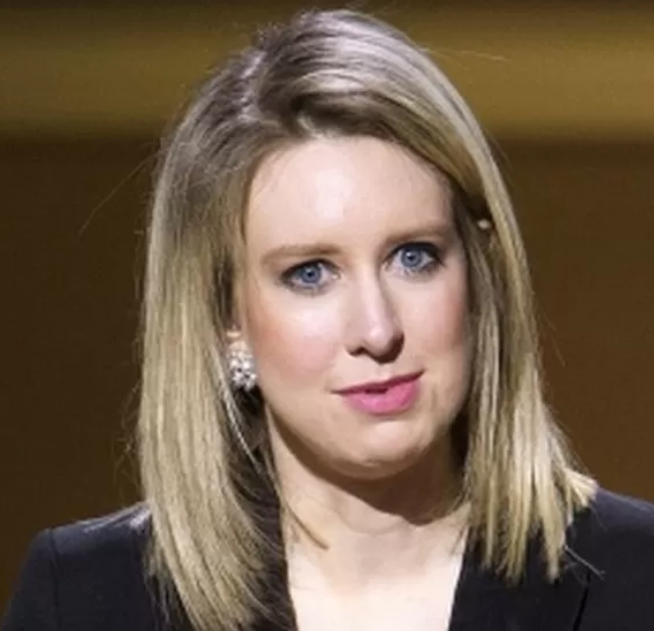 AMBITION Elizabeth Holmes, aged 19, came up with an idea that she believed could change the world.

There was just one problem: it didn’t work.

However, that didn’t stop her creating a multi-billion dollar company, Theranos, on the back of it.

On Wednesday the illusion finally shattered as she lost control of the firm and was fined $500,000.

Neither she nor the company admits any wrongdoing, but the dream that created Theranos and made Ms Holmes a billionaire was well and truly dead.

Like all good internet start-ups, Theranos and Ms Holmes had a great story. Her father worked for government agencies, often overseeing relief work and she was brought up wanting to change the world for the better.

Aged 19, she dropped out of Stanford University shortly after filing her first patent, for a drug-delivery patch that could adjust dosage to suit an individual patient’s blood type, and then update doctors wirelessly.

The patch never made it to market but the big idea – the one upon which the whole hoopla of Theranos was built, was a machine that could test for a variety of diseases through only a few drops of blood from a person’s finger.

Naturally, it too came with a story: as a child she had hated needles, and she would tell how her mother and her grandmother fainted at the sight of them.

But more than that, it really could have been a game changer.

Called « Edison », after the inventor, it promised to revolutionise blood testing. Theranos planned to charge less than half the rates charged by Medicare and Medicaid in the US – potentially saving the US government $200bn over the next decade.

It would democratise the testing process, allowing anyone to get a test done at a pharmacy and have it analysed in hours. Theranos was what every investor loves – an industry disrupter, a David to take on the Goliaths of the diagnostics industry such as LabCorp and Quest.

By 2014 the company had raised more than $400m and was valued at about $9bn. Ms Holmes was worth $4.5bn, according to Forbes magazine, making her the youngest self-made female billionaire.

She had also convinced big names on to her board including two former US Secretaries of State, Henry Kissinger and George Schultz. With hindsight, it is easy to point out that few of the names, while famous, had much to do with medicine or science.

Meanwhile, Ms Holmes was an interviewer’s dream: she cultivated a Steve Jobs image, wearing only black turtleneck sweaters in public. She quoted Jane Austen by heart. She went vegan and talked enthusiastically of her favourite wheatgrass-celery-cucumber « green juice ». She spoke on panels with Bill Clinton, and gave impassioned TED talks.

There was even talk of making a movie based on her, tentatively titled Bad Blood.

But if she talked the talk, there were hints that Theranos did not quite walk the walk. To start with there was the obsessive secrecy. Ms Holmes was founder, chief executive and chairman. Nothing was done without her approval. And when it came to talking about « Edison », the shutters came down.

This is what she said to a New Yorker reporter when he asked how « Edison » worked: « A chemistry is performed so that a chemical reaction occurs and generates a signal from the chemical interaction with the sample, which is translated into a result, which is then reviewed by certified laboratory personnel. »

Was this secrecy – or a cover-up?

Not everyone was a believer. Bill Maris, who runs Google Ventures (GV) in 2013 decided not to invest. In an interview with Business Insider, Maris said he had got a member of his life-science investment team to take the blood test. It turned out it wasn’t as simple as the publicity claimed. Maris said: « It wasn’t that difficult for anyone to determine that things may not be what they seem here. »

One journalist who was more than suspicious was the Wall Street Journal’s John Carreyrou. A two-time Pulitzer Prize winner, he worked patiently to find out what was really going on at Theranos, talking to employees who started to tell a very different story from that of the dazzling public image.

Some were saying that the « Edison » results were inaccurate. Others revealed that the vast majority of tests were not done in Theranos labs at all, but in conventional machines bought from mainstream suppliers.

After his story was published by the Journal in October 2015, the US financial regulator, the Securities and Exchange Commission, opened an investigation.

The Centers for Medicare and Medicaid Services, which oversee blood testing laboratories, revoked Theranos’ licence. Within a year the company began shutting down its labs and laid off more than 40% of its full-time employees.

Forbes magazine revised Ms Holmes’ wealth down to « nothing ».

The company has survived and managed to get financing to rebuild itself, but as of Wednesday Ms Holmes lost control of it, gave up all her shares and was fined $500,000. Looming over her is the possibility that federal prosecutors will pursue criminal charges.

The SEC summed up what was wrong with Ms Holmes and Theranos in a damning report: « Innovators who seek to revolutionise and disrupt an industry must tell investors the truth about what their technology can do today – not just what they hope it might do someday. »

Theranos said: « The company is pleased to be bringing this matter to a close and looks forward to advancing its technology. »

It is now banking on a new development, the Mini-Lab, which it says combines the capabilities of an array of traditional diagnostic instruments.

But it has an uphill struggle. Despite changing its management and restructuring, it has a reputation that will be hard to live down, with or without Elizabeth Holmes.