RED CONTAINER. Geneva is believed to be the first city in the world with its own portable container to save cultural property in the event of local disasters. swissinfo.ch took a look inside.

In a storage yard in a non-descript part of Geneva, a shiny red container lies dormant. But open the flaps – an operation performed in seconds – and the 6m x 2.5m container becomes a mobile centre for the rescue or repair of heritage goods.

When fire, water or earthquakes damage works of cultural importance such as books, manuscripts and works of art, time is critical. The container dubbed ‘La Berce’ (French for cradle) is Geneva’s all-in-one solution.

Stocked with expert equipment, ventilators, filtered vacuum cleaners, hygrometers, natural sponges and even tiny sable brushes, the purpose of the container is to provide the tools for an orderly evacuation from danger zones or to arrest the degradation on site. It was recently launched by the city of Geneva and is waiting to prove its worth.

“We have gone to great lengths to put in place something that we’d rather not have to use,” said project coordinator Nelly Cauliez, head of conservation at the Library of Geneva. She has worked with political authorities, curators and conservationists, as well as the local security services, to coordinate the project and design the container.

Techniques to save paper works damaged by water:

FrA wet book can be preserved from deterioration if it is frozen within 24 to 48 hours. A very rapid freezing to -30° C prevents the formation of crystals and dissolution of the ink. The temperature is then stabilised at -18° C.

Freeze-drying, based on the sublimation principle, lets the water contained in the paper to progressively escape.

Gentle ventilators can be used to air the books that are only slightly damp and prevent the formation of mould, without bending the pages.

The launch of the container as part of a bigger rescue plan has given Geneva an edge most other cities don’t have. A library bus equipped in a similar way is planned by the French section of the International Committee of the Blue Shield, but has not yet materialised.

“It has been a long time in the making,” Cauliez explained. The starting points were evaluations in 2007 and 2011 of the Geneva Library’s buildings where numerous security and climatic deficiencies were found, and have since been put right. But more importantly, an evacuation plan in the event of an unforeseen disaster, with a well-defined chain of command, was found to be lacking.

The 2008 fire that devastated the former chemistry school of the University of Geneva with the loss of more than a thousand books set the wheels in motion for a coordinated rescue plan. “It was a dramatic event, but a positive wake-up call.”

By 2009, the city of Geneva had adopted the ‘PBC’, a cultural heritage protection plan to cover the many institutions under its umbrella that range from the Ariana ceramics museum, the Conservatory and Botanical Garden, the Natural History museum, the Ethnography Museum Geneva, the Archives, libraries and the Art and History Museum, all with very different contents.

“We needed to pool our resources and systematise our practices, but we also needed to train the personnel. Poor handling in emergency situations can inflict more damage on heritage goods than the disaster itself,” Cauliez said.

But good intentions are useless unless put into practice, so Cauliez was mandated to set up an evacuation roadmap, using the Geneva library as a testing ground and working closely with the fire and civil protection brigades.

After six months of intense preparations, a test was launched in November 2012 involving 218 persons and 40 vehicles in a mock rescue operation that blocked two central avenues in Geneva. 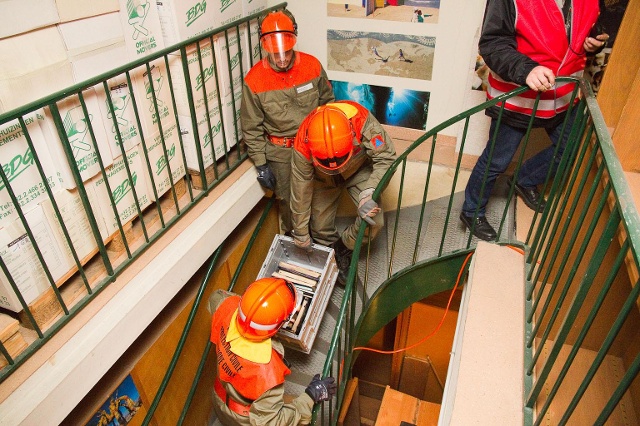 After people were evacuated and the building secured, experts then moved in to prioritise the evacuation of the books and manuscripts, asking questions such as ‘Has the work been microfilmed?’ and ‘What is its intellectual value?’. First aid measures for the books damaged by water (see infobox) were immediately put in place.

Although successful from a point of view of coordination and command, the exercise revealed the need for rapid intervention to minimise long-term damage.

“We realised that we had all the necessary equipment, but that it was all over the place.”

As the former head of the restoration department of the French National archives (and the youngest ever to obtain the title of ‘Chef de travaux d’art’), Cauliez has been instrumental in determining what tools are included in the container.

“This is a process in evolution,” she said, since each cultural institution has specific needs and the PBC is meant to address them all.

For example, museums require salvage measures specific to the objects that they contain: paintings and sculptures in fine arts museums, precious ceramics in the Ariana Museum. Although the Geneva container already includes tools designed to transport large formats, such as lifting devices, suction mounts and chemical-free blankets, the remaining empty shelves will gradually be filled with additional material for specific tasks.

Asked why Geneva had succeeded where other coordination attempts have failed, Cauliez said: “There is a collective spirit in Switzerland that extends to cultural goods. Such a high degree of collaboration between institutions would be unheard of anywhere else.”

When the cost of CHF113,000 ($110,000) for the container, including CHF33,000 for technical material, was put before the city council, it was immediately voted through. “There wasn’t even any discussion. I’ve never seen anything like it,” admitted Martine Koelliker, deputy head of Geneva’s culture department and president of the PBC.

“A high level of collaboration between all partners, including different government departments, was key to our pre-emptive thinking,” she said, adding, “We feel strongly about our culture and because our political representatives do as well, it creates a great dynamic”.

The Institute for Digital Archaeology  (IDA), a joint venture between Harvard University, the University of Oxford and Dubai’s Museum of the Future, has set up the ‘Million image database’ programme to allow the digital 3D reconstitution of destroyed archaeological sites.  As a pre-emptive measure, images are being taken surreptitiously before it is too late.

Since July 2015, ISIS has controlled a region of land in the Middle East that includes innumerable cultural heritage sites as determined by the UNESCO World Heritage Centre, including the ancient city of Palmyra in Syria that is being systematically destroyed.

In total, 41 major cultural heritage sites and monuments have been lost to history so far.