Chicago’s David Bowie Is exhibition shows galleries how to face the changes.

Although its museums acquire major exhibitions, they do so long after they’ve premiered in larger cities, giving the city less cultural cachet on the flashy, money-driven art scene.

So how did Chicago’s Museum of Contemporary Art (MCA) become the only American venue to exhibit David Bowie Is … over flashier locations like New York or Miami? Consider it a mix of things: great timing, persistence and a willingness to think creatively.

“We first heard about it in early 2013 and got on the phone immediately,” says MCA chief curator Michael Darling. “We have the most contiguous space, and have the chance to make it more of an engrossing experience than anywhere else.”

Located on the museum’s fourth floor, the exhibition is sculptural, immersive and dramatic. The decision to construct the exhibition in this manner was first made by the Victoria & Albert Museum in London, the original organizers of the exhibition, but the conceit has been greatly expanded upon in Chicago.

Nearly every inch was utilized of the fourth floor which houses the exhibition. Atriums were blocked to create a singular pathway that deters visitors from distractions. Walls were repainted and rooms torn down (or built up) to allow for a fluid structure that plays with audiences changing tastes and attention span. 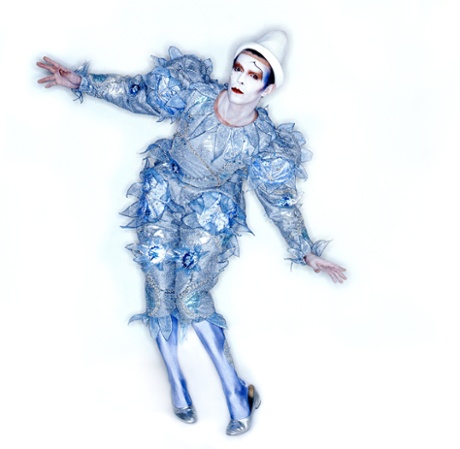 The exhibition structure also acts as the perfect showcase for Bowie’s numerous, androgynous costumes that seem to defy convention even in 2014, nearly 40 years after he first wore them. It’s also what made Bowie so different from other rock musicians who find their looks and stick to it, like Bruce Springsteen or the Rolling Stones.

Upon entering the fourth floor, guests receive a pair of headphones which will guide them through the exhibit, offering everything from audio of televised performances to sound bites on Bowie’s fashion, art and design choices for more than half a century. Although each room is distinct from the next, the exhibition as a whole appears heavy and rich, with darkly-painted walls giving the aura of a nightclub and a thicket of Bowie’s personal ephemera. In one room, you might find a Top of the Pops performance projected on a geometrical glass structure flanked by colorful, androgynous costumes. In another, you’ll find images and video of concurrent global events like the moon landing hung on the walls or built into site-specific displays.

Great attention is also paid to the quality of the sound (Sennheiser, the cult German audio electronics company is a sponsor) with sensors in the floor providing a soundtrack to guests’ movements. The show takes an hour and a half to view, on average, compared to the normal half hour to 45 minutes for most traditional exhibitions of this size. Your run-of-the-mill gallery exhibit this is not. 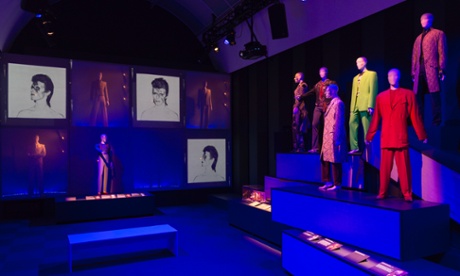 Bowie is an artist who stretches definitions of contemporary culture and the museum has likewise crafted complementary programs that touch on the intersections of numerous parts of culture, from music and art to dance and theater.

This is not the first time the museum dedicated an extensive amount of programming to combining the efforts of different departments. In fact, it has made it something of a signature for the space, distinguishing it from the larger and well-known, but more staid Art Institute. 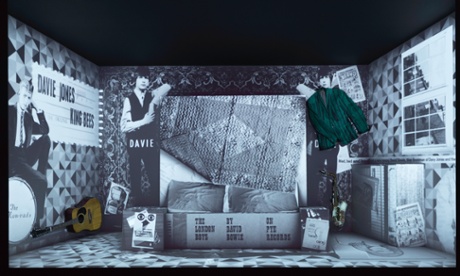 “We were tempted to not do a lot of programming, because the show itself is too big,” Darling said. “But it was just too great of an opportunity to really play this out and use it as a platform to test out other ideas and bring other unique people to the museum.”

Internally, they call it convergence, but externally, it just means that guests can experience a second treat, one that extends beyond four walls. Museums have often struggled to adapt and find new audiences. But the MCA appears to have found, if not a solution, then certainly an answer to the question: “Who still wants to go to a museum?”

Finding participants was easier than the museum’s team imagined, at least easier in comparison to past, less flashy exhibitions. “It shows how relevant Bowie still is and how people hold him in their consciousness,” Darling began.

And for all of that effort and for a museum often overlooked for the big guy across town, that effort seems to have paid off. “Once it was announced that we were doing this, we just started getting calls immediately,” said Darling. ‘Superfan’ tickets, sold to Bowie fans across the globe for $100, quickly sold out.

“Bowie fans for sure will find all different sorts of great details,” Darling added. “But it shows a great glimpse of one person’s creative career and how constantly he was attending to the development of his career. Most people can appreciate that.”