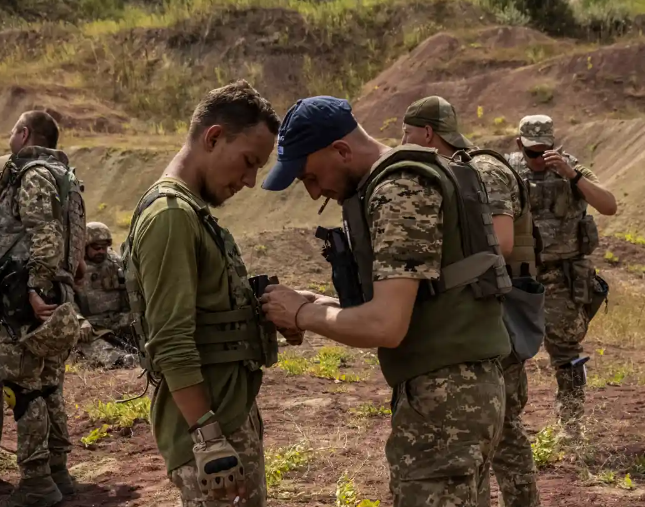 BATTLE FIELD “Stand by,” shouts a former US Marine. “Threat!” comes the next call and a volley of gunshots echoes around a disused quarry, in a Ukrainian hillside, just a few miles from the frontline of the war.

Dust kicked up by the bullets mixes with the men’s sweat in the 30C heat. “That is not the gun,” says the trainer, singling out a frustrated looking man who had peppered a target five metres away with small holes. “You were putting the sight on a different spot every time.”

In the heart of the Donbas, a group of eight highly experienced western ex-military personnel are delivering an intensive 10-day training course for 40 new Ukrainian recruits who have been pulled straight from the fighting.

As the battle for Ukraine’s east grinds on, soldiers in the Donbas have been taking heavy casualties in a vicious artillery battle. Ukraine’s professional fighting force, who have been defending the eastern frontline since 2014, are severely depleted. Since 24 February new recruits have been surging to the frontline, many with shockingly little training.

The recruits on the course have a patchwork of equipment: different weapons, fatigues and body armour of varying quality. Aged between their early 20s and mid 50s, the men are of all shapes, sizes and levels of fitness.

One in 10 was in the military before the war and they have had very little formal training, explains Andy Milburn, founder of the Mozart Group, a new private security company that’s tasked itself with training Ukrainian soldiers.

Milburn, a retired Marine Corps colonel who spent 31 years in the US military, gathered expert volunteers to train civilians fighting in Kyiv’s civil defence force as they defended their capital. Now based in Donbas, the Mozart Group consists of between 20 and 30 volunteers from the US, the UK, Ireland and other western countries.

The Mozart Group’s name was coined by its members as a tongue-in-cheek musical reference to the Wagner Group, a shadowy Russian paramilitary organisation that’s often described as Vladimir Putin’s private army. Milburn says at first he was “a little ambivalent about using the name” but that it has “caught on as a brand now”.

Since 2014 the Wagner Group has operated in insecure, low-income countries, including Syria, Libya and Central African Republic, protecting Russian interests with little regard for human rights or international law.

Largely funded by US private donors and made up of carefully vetted recruits, the Mozart Group also delivers humanitarian aid including sanitary products and food to frontline towns, and extracts vulnerable people from high risk areas of fighting.

Ukrainian soldiers are given five- or 10-day crash courses in basic weapon handling, marksmanship, fire and manoeuvre and battlefield tactics that would ideally take six months to teach. The trainers have taught thousands of troops to speak to recruits via two interpreters, which Milburn says is not enough for the job but they have struggled to find people with the necessary skills.

“I’m yet to fight on the frontline but we have been manning positions that have been shelled and hit by rocket attacks,” a 42-year-old soldier who identified himself only by his call sign Bison tells the Guardian during firing practice, dressed in a secondhand British camouflage tunic with a union jack badge stitched on the sleeve.

Bison, a mechanical engineer from Dnipro, bought a hunting rifle after the war started, to get some shooting practice and is now operating as a platoon medic. “I did a week’s tactical medical course after having a bad cycling accident during the Covid lockdown. I told them and they made me a medic,” He says with a smile and a medical pack attached to his body armour.

That’s more than most medics, according to Dathan, a former advanced paramedic who spent 23 years serving in the Irish military in counties including Syria and Kosovo, and joined the Mozart Group in May.

“You ask medics what their qualifications are and they say: ‘Well I was given this bag and now I’m the medic’,” says Dathan.

“Only one out of this group of 40 had zeroed his weapon before the training started,” says Milburn as he walks through the scrub to the makeshift training ground. Zeroing a weapon means aligning the sights so you can accurately aim at a target. “That’s the first thing you do,” says Milburn.

The Ukrainian troops are trained close to the frontline as their commanders cannot risk their soldiers being away from the battlefield for too long in case the Russians try to advance. Ideally these groups would be training 100 to 120 men at a time but they can’t afford to take them from their positions, says Milburn.

“It’s backwards: you don’t go to combat first and then come back to be trained,” Dathan agrees. “The Ukrainian government doesn’t want to say that most of their military isn’t really trained. But they are trying to fight the Russians who, luckily enough, aren’t trained either.”

“This is what it must have been like in world war one,” says Alex (not his real name), speaking to the Guardian over the phone from Bulgaria. Alex is former UK soldier who was taking a break but said he intended to come back to help permanently.

“They are 36-, 37-year-old men and four months ago these guys were taxi drivers or farmers. None of them want to be in the army, but they say our country has been invaded. What do you expect us to do? Massive respect to them. But it is quite sad to be honest,” says Alex.

But what the troops lack in experience they make up for in enthusiasm and determination. “They are upbeat, they listen, they are attentive and most of all they have a great sense of humour,” says Milburn, looking over the training exercise.

“They don’t complain, take everything in and give 100%,” Dathan agrees.

Tiger, a 22-year-old soldier who was studying law in Dnipro when the war started, says he is now completing the last year of his degree remotely while getting ready to fight.

Mozart’s members are keen to separate themselves from the influx of war tourists and want-to-be fighters who could be found telling stories and propping up hotel bars in expensive new military outfits in Kyiv at the start of the conflict. “It’s dangerous,” Alex says. “You might get yourself or someone else injured or killed – and it damages relations between westerners and Ukrainians.”

The trainers say they joined the Mozart Group to become “combat multipliers”, saying it made sense to train hundreds of Ukrainians rather than risk quickly getting killed in the fighting. The UK government website says those travelling “to fight, or to assist others engaged in the war” could be prosecuted on returning to the UK.

From speaking to Ukrainian troops and commanders, Alex and Milburn agree that US and western weapons systems and military equipment are not being used or distributed correctly due to Ukrainians lacking training and skills.

“They are not deploying the weapons,” said Alex, who, during his seven and a half years with the British military, specialised and trained in the use of Javelins and NLAWs, hi-tech US and UK anti-tank weapons, the use of which proved pivotal in Ukraine’s success in pushing Russia back from Kyiv in March.

Alex says he understands from conversations with commanders that without the proper training, the $178,000 Javelins systems are being misused or becoming redundant, with sophisticated sight batteries running out before the rockets are fired. “They are not getting the training they need,” says Alex.

At the end of the marksmanship lesson, the troops gather around for a briefing and Q and A session. “Where should the metal plates be positioned ideally in our armour?” asks one man, and the trainer gives a demo while the men look on, listening intensely. “I’m becoming more calm as I get more training,” says Bison when asked if he was worried about going to the frontline.

Nestor, a 26-year-old Ukrainian soldier also from Dnipro, one of the few who had been fighting in the Donbas since 2014, went back to their firing range with Rob, the former US Marine, to get some more tips on changing magazines once the debrief had finished. “These instructors are amazing, it’s so detailed no matter your experience level,” Nestor says. Of the 15 friends Nestor has lost to fighting in the conflict since 2014, 10 have died this year.

While they have supplied weapons and training overseas, the US, the UK, the EU and other western allies have not deployed troops to Ukraine for fear of the conflict escalating to a war between Russia and Nato. However, Andy Milburn wishes he had more contact with the US government.

Asked whether he shares intelligence with the US, he replies: “That’s kind of the easy part” – and explains that the US government is concerned that if they fund Mozart, the group might turn into a private military contractor becoming involved in the fighting itself.

I write from Ukraine, where I’ve spent much of the past six months, reporting on the build-up to the conflict and the grim reality of war. It has been the most intense time of my 30-year career. In December I visited the trenches outside Donetsk with the Ukrainian army; in January I went to Mariupol and drove along the coast to Crimea; on 24 February I was with other colleagues in the Ukrainian capital as the first Russian bombs fell.

This is the biggest war in Europe since 1945. It is, for Ukrainians, an existential struggle against a new but familiar Russian imperialism. Our team of reporters and editors intend to cover this war for as long as it lasts, however expensive that may prove to be. We are committed to telling the human stories of those caught up in war, as well as the international dimension. But we can’t do this without the support of Guardian readers. It is your passion, engagement and financial contributions which underpin our independent journalism and make it possible for us to report from places like Ukraine.

If you are able to help with a monthly or single contribution it will boost our resources and enhance our ability to report the truth about what is happening in this terrible conflict.