When Does the Clean-Energy Infinity Loop Start? 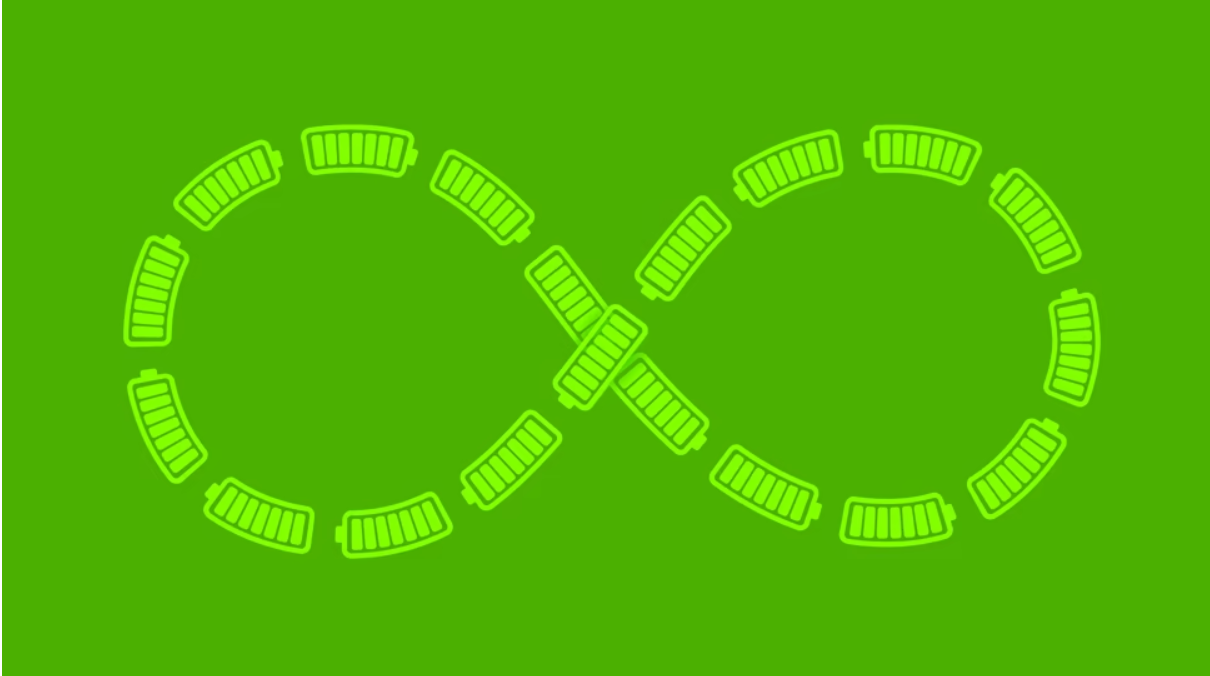 FUEL PUMP Digging up minerals for rechargeable batteries has a high initial cost, but eventually those minerals can be recycled indefinitely.

Last month, my 1983 Volvo broke down in a remote part of Oregon. It took two days to get a replacement fuel pump. In those two days, sitting in the dry High Desert heat in a plastic chair outside the shop, waiting for mechanics to completely replace the ancient fuel lines under my beloved little sedan, I spent a lot of time thinking about buying an electric vehicle. What was I, an environmental journalist, doing burning fossil fuels on the daily just to get to point B? In 2022? It was shameful.

These days, the hot slogan among the climate cognoscenti is “Electrify everything.” But electrification has its own environmental impacts. In particular, batteries in cellphones and electric cars require minerals that have to be mined. There is a real tension emerging between environmentalists who are very concerned about the problems associated with the renewable-energy transition and those who see those issues as minor and tractable compared with the ongoing disaster that is the fossil-fuel economy.

Rechargeable batteries work by popping electrons off lithium atoms, then generating power as they rush through a circuit to reunite with the lithium ions. To work, the lithium ions must be moved back and forth between two ends of the battery cell: one typically made of some kind of metal oxide and the other primarily out of graphite. Like fossil fuels, lithium, cobalt, nickel, and other components must be extracted in large amounts from the Earth. In theory, they can be recycled, but they come with a high up-front cost—so high, even, that some people think it’s not worth paying.

In Idaho, cobalt is being mined on federal land. In the Democratic Republic of Congo, some cobalt-mining work is done by children. Two of my friends, Ka’ila Farrel Smith and her partner, Cale Christi, are fighting the proposed Thacker Pass Lithium Mine, in Nevada. They are supporting an Indigenous-led activist group called People of Red Mountain, which says that the mine would cause “irreversible harm to the Fort McDermitt Paiute and Shoshone Tribe, ancestral massacre sites, water, air, medicines, and culturally important wildlife.”

And around the world, the mineral-mining process itself creates greenhouse-gas emissions. Because of the emissions associated with making batteries, manufacturing EVs actually releases more greenhouse gases than manufacturing cars with combustion engines.

Of course, once you drive them, electric cars’ lack of ongoing emissions eventually makes them the climate winner. After about a year of use, depending on the car and the electricity sources in your area, the emissions of a gas-powered car begin to outweigh those extra emissions associated with an EV battery. I peered at my sweet little Volvo, up on the lift. Nearly 40 years of belching out planet-toasting fumes. It was unconscionable.

And although the gas my Volvo had burned through was gone forever, the minerals in a battery, in theory, have to be wrested from Mother Earth only once. After those minerals are  in circulation, battery recycling should eventually be able to create a nearly closed loop.

“You have a cobalt atom. It’s the same cobalt atom when you’re done with recycling,” says Jeff Spangenberger, the head of the ReCell Center in Lemont, Illinois, where industry, academia, and government laboratories collaborate to improve battery-recycling technologies. “You can infinitely recycle these metals.” The work ReCell does is premised on the expectation that someday, most metals in new batteries will come from old batteries.

That infinity loop can’t really start for several decades. With the number of new electric vehicles increasing every year, there simply aren’t enough old batteries available yet to supply the needed minerals. According to Spangenberger, the useful life of a vehicle is about 15 years. (Tell that to my Volvo.) The very first EVs with lithium-ion batteries were first sold in 2008. “So those haven’t even reached end-of-life yet,” he told me. “At some point, we’re going to reach an inflection point where we will actually have most of the materials we need in our end-of-life products.” And while some recycling systems feel good for the consumer but don’t actually work, 99 percent of the lead-acid batteries in most gas-powered cars are recycled today, suggesting that if recycling infrastructure exists, the batteries will find their way to it.

That infrastructure is being developed now. The company Li-Cycle, for instance, is working on  a “spoke and hub” battery-recycling system. At the more numerous “spoke” facilities, waste from battery manufacturing and dead batteries is shredded while submerged in tanks of a proprietary fluid. (I asked Kunal Phalpher, the chief strategy officer, if the fluid was “like Coke,” in the sense that he couldn’t tell me the recipe. “Yes,” he replied. “But it isn’t actually Coke.”) What emerges is plastics, copper, and aluminum, and a black powder that is 40 percent graphite and lesser amounts of lithium, nickel, and cobalt. The name for this substance is very metal: black mass.

The black mass is then transported to a centralized “hub” facility, where the various elements are separated out. Whereas the spoke facilities look like a converter belt of batteries getting dumped into a shredder, the more complex hub undertakes all sorts of hydrometallurgical processes. It looks, Phalpher told me, more like the kind of place you might set an action sequence in an Arnold Schwarzenegger movie—say, Commando—“a series of pipes and tanks and pumps.”

At the end, 95 percent of battery minerals are recovered. So there is a bit of loss. There will likely always be some loss in the system—some minerals that can’t be recovered, some batteries that never reach the recycling center. Which means some mining. The one exception would be if demand for EV batteries goes down, leaving more minerals in circulation than the market needs. What could make that happen? Maybe a new technology that we haven’t even dreamed of yet—something, Spangenberger joked, like the “flux capacitor,” which makes the time-traveling DeLorean go in Back to the Future. Commando, Back to the Future: These reference points are almost as old as my car.

The bottom line is that to get enough minerals into circulation so that car buyers of the future can purchase EVs that are 95 percent recycled, humanity must continue mining for many years to come. For some, that’s a price worth paying to get off fossil fuels—especially if, in this big initial push, the inevitable damages are minimized or handled more justly. For others, it is unacceptable.

The journalist David Roberts, who follows renewable energy closely for his newsletter, Volts, thinks concerns about resource extraction required for the renewable-energy transition are legitimate, but also potentially “exploitable” by those who would like to continue to profit from the oil-and-gas status quo. And while there are real problems, they are fixable. “We should be trying to diversify the market for lithium, and we should be trying to impose labor and environmental standards,” he says—without forgetting that this new system represents a huge improvement over a fossil-fuel-driven world. The status quo, he says, is “a goddamn nightmare.”

My fuel pump was fixed. I got back on the road, still unsure of the most ethical course. Drive this old Volvo for as long as possible? Recycle it now and buy a used EV? Try to go car-free? “I mean, you could do the life-cycle math,” Roberts told me—he himself recently bought an EV after “years of Hamlet-like indecision.” But what’s ultimately more powerful than any single consumer decision is creating a system in which a transition away from fossil fuels happens as ethically, safely, and quickly as possible.

I asked my friend Cale how he thinks about that transition—how we should get around without mining lithium; he replied that the problem is our current culture, not just its cars, but its resource-intensive militarism and ceaseless consumerism. Reorienting around our local communities will mean less need to drive at all. Thinking long-term, he says, “maybe we should get around less.”

As a child of the 20th-century American West, I’ll admit that sounds hard. I love this feeling, this feeling of being free and radically mobile, the windows hand-cranked down and the volume up. What I want is this feeling, but without any guilt. And that is something I cannot have.

Emma Marris is a freelance writer