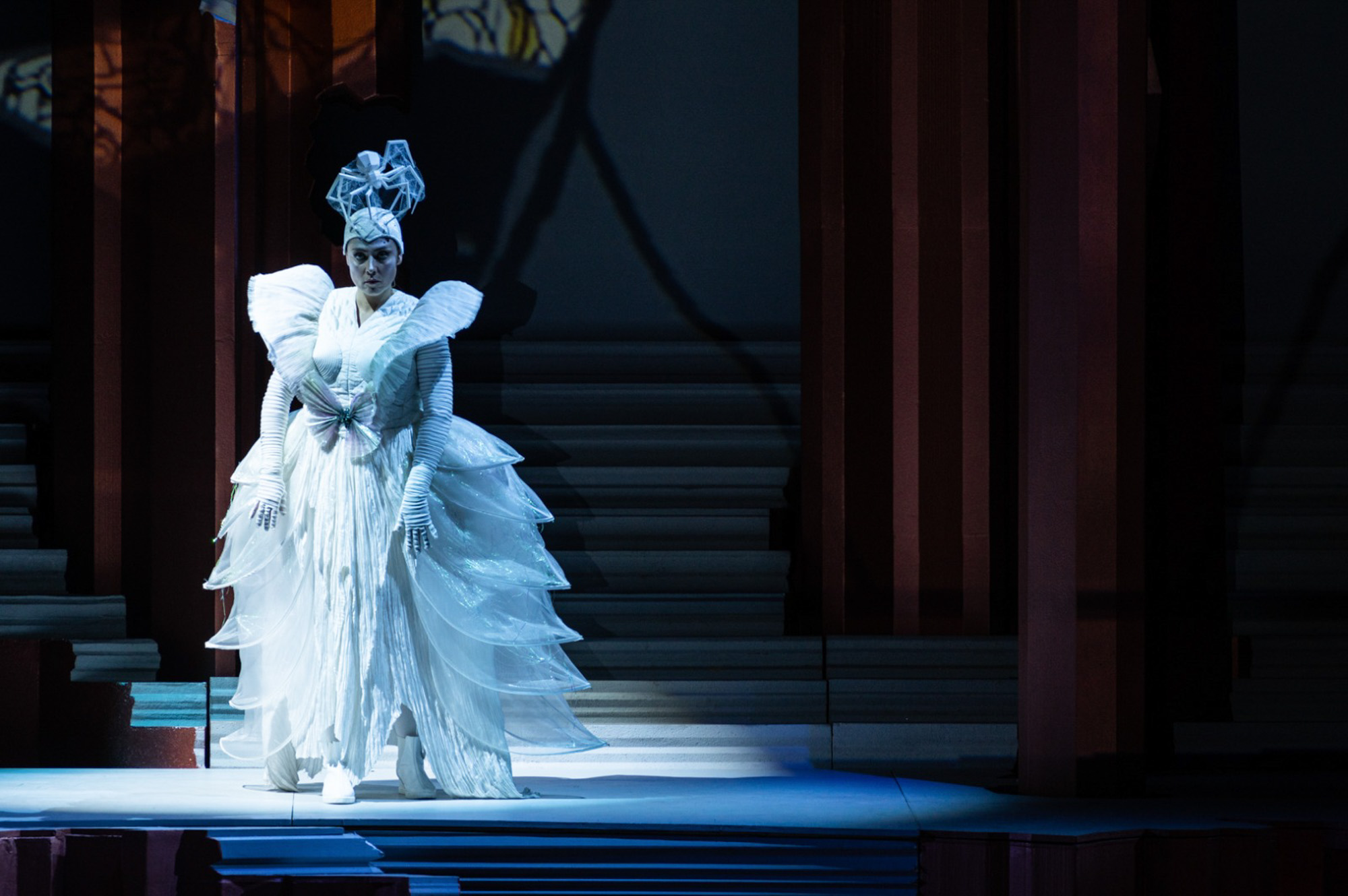 Ai Weiwei remains true to his maxim “Everything is art. Everything is politics” with his production of Giacomo Puccini and Franco Alfano’s 1926 “Chinese” tragic fairy-tale opera, Turandot, which opened at the Teatro Costanzi in Rome in March. The work was conducted by the Ukranian maestro Oksana Lyniv, the first woman to be appointed music director of an Italian opera house.

Ai set Puccini’s story of dysfunctional love, exile, and execution in the context of today’s unfolding political events. “It’s not just a story about China,” the artist said, “it’s about the global condition.” Scenes from Ai’s recent documentaries play on a screen above a turning stage, which showcases his impressive, apocalyptic set designs and surreal costumes.

“People of Peking! This is the law,” the Minister announces, with missiles protruding from his headgear and bombs embroidered on his robe. Those who court the emperor’s daughter Turandot without successfully answering three riddles will be executed. Empty highways appear on a screen above a locked-down Wuhan, radiating from the ruins of a dystopian city atop a world map. The tenor protagonist, Prince Calaf, recently reunited with his father, the blind, deposed Mongol khan Timur, observes, “No place is safe for us in this world, father.” The desolation on screen and stage echoes the real-life exile endured by Ai and his father when Mao Zedong banished them to Xinjiang in 1961, with the rest of his family joining a year later.

A Persian prince fails to answer the riddles. The townspeople, overjoyed to witness an execution, perform the dance of death. Security guards in black riot gear and citizens in hazmat suits echo their bloodthirsty desire in harrowing harmony. Twirling umbrellas, recalling the “Umbrella Movement” protests that shut down Hong Kong in 2014, thunder across the stage. The Minister, shielded by his crab-headed guards, observes the carnage. The drums beat louder as the rising voices pulsate to the rhythm of the riots.

Princess Turandot enters dressed in a chrysalis-white gown. For Ai, Turandot is a metaphor for China’s Communist Party. Powerful, cruel, and ice-cold, she’s seductive and a mystery to foreigners. Timur fears his susceptible son has fallen under Turandot’s spell and begs him to flee, remarking, “All our graveyards are full.” Images follow evoking countless makeshift burial sites from the pandemic, graves of refugees drowned at sea, and mass graves at Mariupol, Bucha, and other Ukrainian cities leveled by Russian slaughter.

“Drag him away,” says the man with the bomb head, as Hong Kong protestors are being beaten and battered by police. “We dig a grave for you, who challenge love.” Accepting that challenge, Calaf strides heroically toward a wall of police.

The emperor makes his entry, his throne rising above the world stage. Graphics by Ai of handcuffs, chains, surveillance cameras, Twitter birds, and nuclear bombs—treasures of today’s tyrants—swirl on screen in a vivid golden hue. Meanwhile, the satellite-headed ministers and their cohorts sporting missiles and zodiac animals on their headgear rule over citizens dressed as street protestors.

Turandot sings an aria in an attempt to rationalize the deranged motive behind her vendetta. She claims to be avenging a legendary injustice, an ancient relative who was raped and murdered 1,000 years ago. With charismatic charm, her siren song lulls the crowd into blind obedience. Like Vladimir Putin’s rationale for invading Ukraine, she offers a tyrant’s false narrative as justification for murder. The people are turned into killers or accomplices. Images of severed zodiac heads floating on screen recall Turandot’s past victims. Classic Chinese mythological creatures encircle Tatlin’s unfinished tower—intended as a monument of Communism—utopia unattained. The entire ensemble lines up to salute the emperor like Party hacks hailing President Xi Jinping. They raise their arms in unison and then, unexpectedly, extend their middle fingers—Ai’s trademark gesture.

In act three, the full force of authoritarian power is unleashed. “Tonight no one must sleep in Peking!” decrees the Minister. Images of Hong Kong protestors fill the screen. Portraits of freedom fighters Edward Snowden, Julian Assange, and Chelsea Manning blink on and off. An ancient Roman mosaic depicting a skeleton appears with “Know Thyself’ written in Latin. Turandot, now sprouting white butterfly wings from her belly, pretends to offer freedom from the cocoon, while spinning her deadly web of death and confinement.

After Calaf answers the three riddles, Turandot reneges on her word and refuses to marry him, invoking her own version of Hong Kong’s National Security Law. The guards arrest Timur and his loyal maidservant Liu, who’s secretly in love with Calaf. The predatory Turandot, smelling her victims, reappears with a white-widow spider in her hat. The crab guards capture Liu and put a knife to her throat. Under torture, Liu refuses to reveal Calaf’s true name. As Liu’s solo climaxes, we see an animation of mothers and children in refugee camps, echoes of female victims of war and migration.

No one lives “happily ever after” in Ai’s version of the fairy tale Puccini left unfinished at his death. Calaf proves to be no hero at all: He lets his faithful servant Liu die, causes his father to suffer, and stands by as innocent people are tortured, all so he can possess Turandot, the embodiment of tyranny.

The opera is a story of misdirected love, violence, and rule by dictatorial decree. It highlights apathy and culpability, like the global response to Putin’s war in Ukraine, reflecting world leaders’ and the United Nation’s inaction in the face of human slaughter. Ai’s staging asks more questions than it answers, leaving one to wonder what has gone so wrong with the world that nuclear bombs are being dropped in the opera house.

Andy Cohen is an American documentary film-maker, journalist and author based in Geneva. Much of his work is investigative and human rights-based.