Column: ‘Top Gun’ casts Tom Cruise as the hero in the film and at the box office 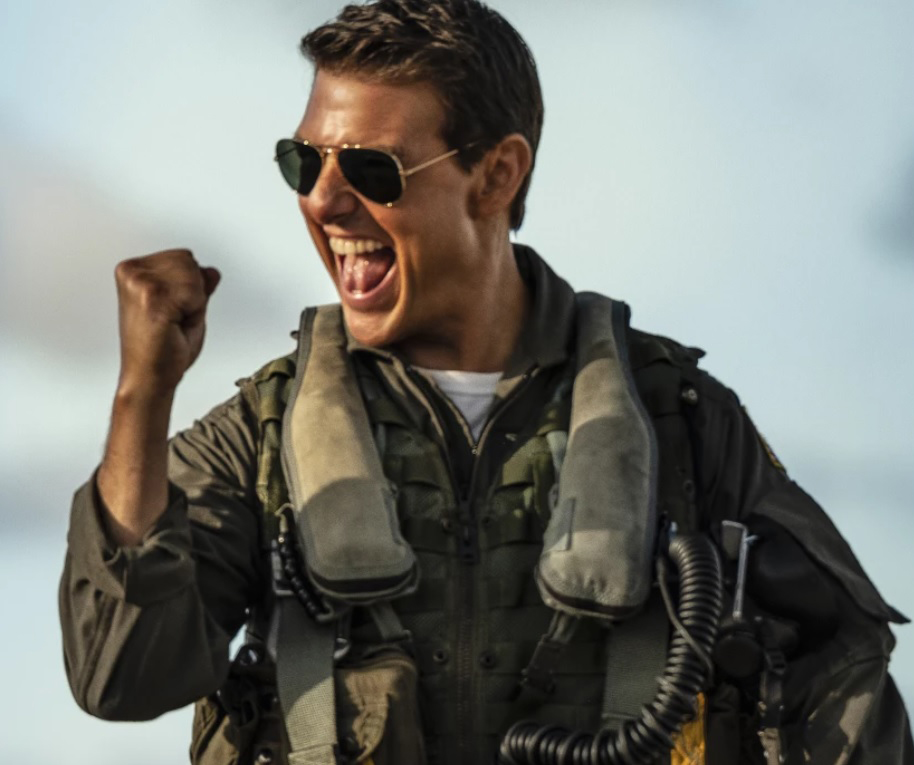 TOP MONEY In the roll-up to “Top Gun: Maverick,” people keep saying Tom Cruise is the last real movie star and I don’t get it.

Apparently, those folks are not quite up to the mark. Apparently, to be a real movie star you have to act exclusively in movies (someone needs to break the news to, among many others, Dames Judi Dench, Helen Mirren and Maggie Smith — and allow me to be present while they do so).

You also need to have a name that, on its own, can conjure audiences and multiple franchises out of thin air.

If that is the criterion for a movie star, then to paraphrase Elizabeth Bennet’s remark to Mr. Darcy, I rather wonder that anyone knows any.

That said, there is no denying that Cruise has accepted the mantle of last movie star — or at least the movie star determined to save the film industry single-handedly.

It is a role in which he is quite convincing.

Whether shouting at the crew of “Mission: Impossible” over violations of COVID-19 protocol because the industry is “looking at us and using us to make their movies” or insisting that “Top Gun: Maverick” be a theatrical-only release and prefaced by a big, splashy, event-driven and very expensive publicity campaign of the sort that is rarely seen anymore, Cruise is here to remind us that the industry will not die on his watch. Not if he can help it.

While, you know, continuing to risk life and limb doing his own stunts in his “Mission: Impossible” films, the seventh of which is set to open in July 2023, because doing his own stunts is what a real action hero does — as he recently said in Cannes: “Would you ask Gene Kelly why he does his own dancing?”

In many ways this moment is simply an extension of his career, particularly in the later years: Against all odds and expectations, Tom Cruise comes through to save the day.

It all matches up nicely with the plot of “Top Gun: Maverick,” in which Cruise’s aging (ha!) title character is enlisted to prepare a group of elite pilots for a dangerous mission, even though everyone involved believes he is washed up. It’s hard not to see this as a wink at Cruise himself, who, despite appearing preserved in ice for the last 20 years, is closing in on 60.

Read a different way, every “dinosaur” crack aimed at Maverick (and there are many) could be directed at a film industry struggling to preserve the theatrical experience in the age of prestige TV and streaming wars.

That Maverick’s nemesis is played by Jon Hamm, who as “Mad Men’s” Don Draper did as much as any single person to put television in the alpha position, makes it even more pointed.

And honestly, who among us won’t be thrilled if Cruise triumphs in life as in the movies? Who won’t cheer if the absurd and exhilarating “Maverick” gives the movie industry the big win it so desperately needs? If we must briefly genuflect before the enduring charm of Cruise’s boyish grin, the power-twitch of his jaw muscles and his frankly eerie ability to still rock a tight T-shirt, well, it seems a small enough price to pay.

But the last real movie star? I don’t know. Hollywood has been predicting the extinction of this species for decades but even in, say, the late ’90s, when Julia Roberts smiled down from every billboard, Tom Cruise existed in a separate part of the stratosphere.

Handsome in a Preppiest Senior way, always giving 200%, he took himself and his career very seriously. Even with the occasional turn in a serious or arty film — “Born on the Fourth of July,” “Magnolia” — his film choices seemed to revolve around maintaining a high-octane, leading-man image.

There was, for many years, very little drama about Cruise. No addictions or benders or on-set tantrums, no politics. Though he always looked great on a red carpet, you couldn’t imagine him pranking or palling around with his fellow celestials. And as a performer he worked almost exclusively in a genre that is best described as, well, “Tom Cruise.”

He could land a one-liner but he wasn’t a comedian; he was swoon-worthy but not really sexy. He ran in every movie (he still does) and played a lot of soldiers or ex-soldiers but there was, inevitably, at least one scene in which his eyes would well with tears.

He never played a superhero, but many of his characters had superhuman tendencies, and for years Cruise himself appeared indestructible. He survived two Hollywood divorces, including one from Nicole Kidman, without putting so much as a scratch on his dream-boy-next-door vibe.

And then, in 2005, he went on Oprah to promote “War of the Worlds” and introduce his new girlfriend, Katie Holmes.

Though not in the same league as, say, slapping Chris Rock at the Oscars, Cruise’s couch-jumping insistence that he was really, truly, with-sprinkles-on-top in love was, and remains, completely bizarre. Like the moment when the first Stepford wife glitches, it forced the world to suddenly wonder, “What is up with this guy?”

Well, Scientology is one of the things that was up with this guy, and as the organization faced increasing scrutiny, so did Cruise.

No one would argue that he stopped being a movie star that day — half of the “Mission: Impossible” and all of the Jack Reacher movies lay before him, along with “Valkyrie,” “Edge of Tomorrow,” a perfectly hilarious performance in “Tropic Thunder” and, of course, “Top Gun: Maverick.” (We will draw a veil over “Knight and Day” and “The Mummy.”)

But he stopped being the kind of movie star he had been. Gone were the complex character-driven hits, replaced almost completely with action pics and sequels.

Partly it was the slow fade of midlevel movies, which had begun long before. But while folks like George Clooney and Meryl Streep struggled to keep them alive, no one looked to Tom Cruise for help.

By 2012, when his divorce from Holmes was followed by a Vanity Fair cover story about the role the Church of Scientology played in his life and marriages, Cruise was not making the Hollywood power lists. He had already become more supersoldier than superstar, playing men who were charming and highly competent but isolated, consumed by their work and fixated on the next mission.

Some of which appeared to describe Cruise as well. Every “Mission: Impossible” was now heralded by news about the actor doing his own increasingly difficult stunts. During the sixth film, he broke his ankle jumping from one rooftop to another and still pulled himself up and got the take.

And an entire publicity tour based on the incident.

Unlike many of his contemporaries, Cruise seems completely uninterested in characters facing down middle age or parenthood or even the pain and wisdom that come with time. In “Top Gun: Maverick,” Cruise’s title character is continually reminded that he is too old for his fighter-pilot job, but he cannot move on and the story doesn’t want him to.

Because he is needed right where he is.

Which is where Cruise finds himself right now, determined to prove there’s life in the old movie industry yet.

It’s important to remember that Cruise is not the only — or even the biggest — audience draw at work. “Top Gun: Maverick” is a long-awaited sequel to an iconic film; people want to see the jets as much as the leading man.

To be fair, these particular jets wouldn’t exist without Tom Cruise. So even if he isn’t the last real movie star, he could be the one who helps remind people that movies don’t need a multiverse to be big and loud and superfun.

That sometimes a killer smile is all the superpower you need.