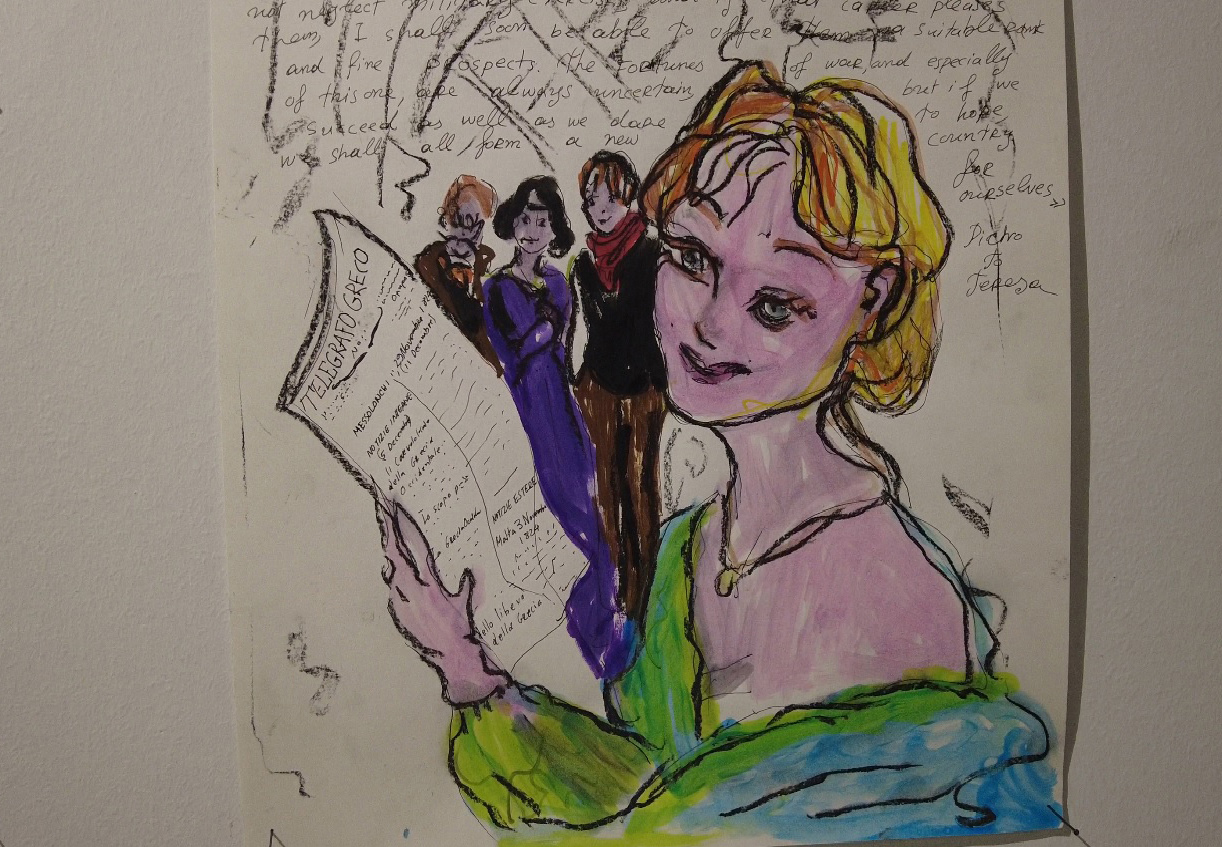 HISTORY Early in the previous decade, Lydia Venieri embarked on a series of works around the life of Lord Byron (George Gordon Byron, 1788-1824). She consulted historical sources, revisited events and sought out information and individuals associated, directly or indirectly, with the key hgure of her research. The volume of her work kept increasing as more information came to light and as she delved deeper into the mystery, the poetry, the melancholy but also the dynamic of a time when everything presaged the sweeping change that was to come. Dissenter and aristocrat, poet and revolutionary, the cosmopolitan and timeless Byron managed to draw the artist into a world that was as real as it was spectral. By 2017 she had created 727 works, all on paper, and executed in different styles. She gave them the general title Byronic Codex, because when brought together they resemble a handwritten codex with the tools to encode and decode a story. They are structured into sections which refer to Byron’s work, views, struggle and death. The overall outcome corners as a continuous narrative that provides the keys to reading and interpreting the events and conditions around Byron’s life and end.

This led her to more series with similar subject matter but different techniques, attesting to the extent of her interest in and fascination with the subject. She went on, steadily and systematically, to piece together a novel biography which reflects her own version of the brief yet illustrious life course of a major and complex figure; of this seminal poet, writer and symbol of European Romanticism who loved Greece, fought for its liberation, played a key role in developing and disseminating philhellenism and breathed his last breath in Messolonghi in 1824, at the early age of 36.

In one of the journals of her research, the artist notes:
« When a figure incarnates an idea, an allegory is born. When an idea as- sumes the form of a specific individual, a self-luminous star is born to influence other people’s trajectories, magnetize masses and illuminate minds. Many people, inherently unable to be/ième in an intangible, abstract idea, end up believing in the person who represents thïs idea. Byron became the idealistic symbol of the heroic romanticism he nurtured with his work and his life…Friends and foes, dreams and adversities helped elevate his reputation and his existence…I immersed myself into all the biographies and accounts of his time, into journals and correspondence, and at the same tïme I delved into capturing the events through painting, placing my works like tiles of a jigsaw puzzle that ends up revealing the unrevealed.”

The Byronic Codex, apart from a mosaic of information gleaned through years of studying information on Lord Byron and his political and literary legacy, is a comprehensive artistic proposition. Lydia Venieri approached her ‘hero’ in conjunction with the historical context in which he lived, shaped his personality and ideology and built his legend as a symbol and a historic figure who influenced the world and continues to do so. Together with Byron’s figure, her swift and dynamic drawing brings to life and renders familiar the other figures who played key roles in his life. Through them we are taken back to the dawn of a new era of rapid socioeconomic developments, in which we recognize our own moments of melancholy, creation, mourning, love and struggle.

While faithful to the atmosphère and the aesthetic of the age in which the story unfolds, the rich narrative of Lydia Venieri is conveyed with a contemporary and free visual script. The outcome is a painterly narrative so dense in terms of content, pace and form that it lends itself to becoming a film; a film that would reveal to a broader audience the unknown aspects of the life of its sensitive yet robust hero, and would be bold enough to pose questions about his death.

In the context of the events for the 200th anniversary of the Greek War of independence, the City of Athens embraced the idea of producing an original him as an artistic treatise but also as testimony of a post-mortem relation between a historical and universally symbolic figure and a contemporary Greek artist with an international career.

The completed film deliberately retains the vertical nature of an artistic portrait; while the pace of the narrative, the flow of information and events, the restless mobility – both literal and internal – of the protagonist and his interaction with historical figures who started the new age of the Western world invest it with the traits of an action and mystery film. Amidst the crossed paths of history and romanticism, literary and political movements, existential drama and social exposure, the viewers find themselves arrested by the plot as much as by the dynamic succession of images in this novel painterly film.

We believed that the presentation of this narrative visual portrait in the form of a film would not be complete without the other ‘protagonist’: the original paintings of Lydia Venieri. To this end, the screening at the Municipal Gallery at Metaxourgio was accompanied by a display of a considerable number of the works that make up the film.

This exhibition was funded and organized by Culture is Athens, the programme which, as part of the 3-year plan of the City of Athens, aims to upgrade, promote and unify the cultural fabric of Athens and provide support to artists, especially during the pandemic.

Katerina Koskina
Dr of Art History, Museologist Advisor to the Mayor of Athens on Culture