EGYPT CASE. Abdel Fatah Said Husein Jalil El-Sisi could be the main character of the real-life 21st century version of the traditional tale “The Emperor’s New Clothes”. Despite the obvious similarities between his surname and the alias of one of the most famous Austrian empresses, his imperial character does not derive from any ties with the old Austrian imperial family, but from the despotic manner in which he is currently running his own empire, Egypt.

The style of this modern emperor shares Cleopatra’s talent for international politics, Napoleon’s obsession for power and Nero’s tyrannical manners. In fact, el-Sisi’s brutal repression against his political opponents, particularly against ex-President Morsi’s supporters, seems to be inspired by the latter’s obsessive persecution of Christians. Massive collective trials, widespread horrendous tortures and the death sentence of the first and only democratically elected president of Egypt are crimes characteristic of the sadist and obscure Caligula’s age.

In the 21st-century version of Andersen’s tale, the Emperor el-Sisi far from appearing naked, it wearing a cloth made with the skin of all those who have been killed, imprisoned or tortured under his regime. However, no “citizen” of the international community seems to be willing to recognize what they all see: el-Sisi’s clothes covered in blood.

Despite undeniable evidence of el-Sisi’s crimes, Western countries collectively deny the obvious facts and remain deliberately ignorant about what is happening in Egypt. “That pattern, so perfect! Those colours, so suitable! It is a magnificent outfit”, says Spain, whose government and royal family recently welcomed al-Sisi and treated him as a legitimate and honourable Head of State in a warm official State Visit. “Oh, how fine are the Emperor’s new clothes! Don’t they fit him to perfection?” replicates Obama, who decided to unfreeze U.S. supply of military equipment to Egypt in March 2015. “No costume was ever such a complete success”, adds United Kingdom, which praised Egypt’s economy at the economic summit in Sharm Al Sheikh.

Andersen’s traditional tale provides us with the key reason of this collective hypocrisy: the fear for public shame. In fact, the story was not originally written by this magnificent Danish author, but by Don Juan Manuel, a 14th-century Spanish writer. The original tale, named Of that which happened to a King and three Impostors, told the story of three cloth-weavers who pretended to be able to make “a cloth of so peculiar nature that a legitimate son of his father could see the cloth; but if he were illegitimate, though believed to be legitimate, he could not see it”. In the catholic 14th-century Spain, where the value of honour was considered a priority, the worst public humiliation was not being son of the presumed father. Andersen, who lived in the rationalist 19th century, adapted the story to his contemporary values and linked the lack of visibility of the cloth with the worst offence of his time: stupidity or lack of intelligence.

In the 21st century, a century inaugurated by the September-11 attacks and dominated by the fight against terrorism, the worst insult that a member of the international community could receive is “Islamist”. The traditional tale has been re-tailored and now it seems that every country is afraid of criticizing el-Sisi’s murderous clothes and being categorized as an Islamist supporter, a Muslim Brotherhood backer or a friend of former President Morsi.

Now, it is more necessary that ever for a courageous member of the international community to stand up, defend its convictions, overcome the fear and loudly cry “but he is wearing clothes made of atrocities”, as that innocent little child did on the tale.

That is the only way to finish the procession of shame and hypocrisy. A procession that is leaving a trail of blood behind it. The blood of the 1,000 people el-Sisi killed in one single day.

REPORT from International Coalition for Freedoms and Rights (ICFR)

This is the first annual report to be launched by ICFR. Research teams working independently in each of the sixteen countries have gathered all the details for the year 2014, all of which have been compiled to make this publication. This report has been endorsed by the prominent human rights lawyers. 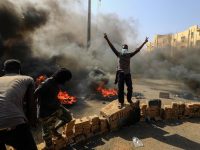