PICTURES. Food production has become a race for maximum efficiency. When it comes to producing meat, whether chicken, beef, or pork, that race has fallen at the feet of the so-called factory farm and its hallmark feature — the feedlot.

« A feedlot is very much a pre-modern city … teeming and filthy and stinking, with open sewers, unpaved roads, and choking air rendered visible by dust, » Michael Pollan writes in his book « The Omnivore’s Dilemma. »

There are currently about 15,500 CAFOs in the U.S. According to FarmForward — which used numbers from the U.S. Department of Agriculture — 99% of farmed animals in the U.S. are raised on feedlots.

For the last several years, British artist Mishka Henner has collected images of the feedlots via satellite, to document a largely hidden phenomenon. Initially, he was searching satellite imagery to look for oil fields. When he came across the feedlots, Henner was shocked he didn’t know about such a central part of our food production. 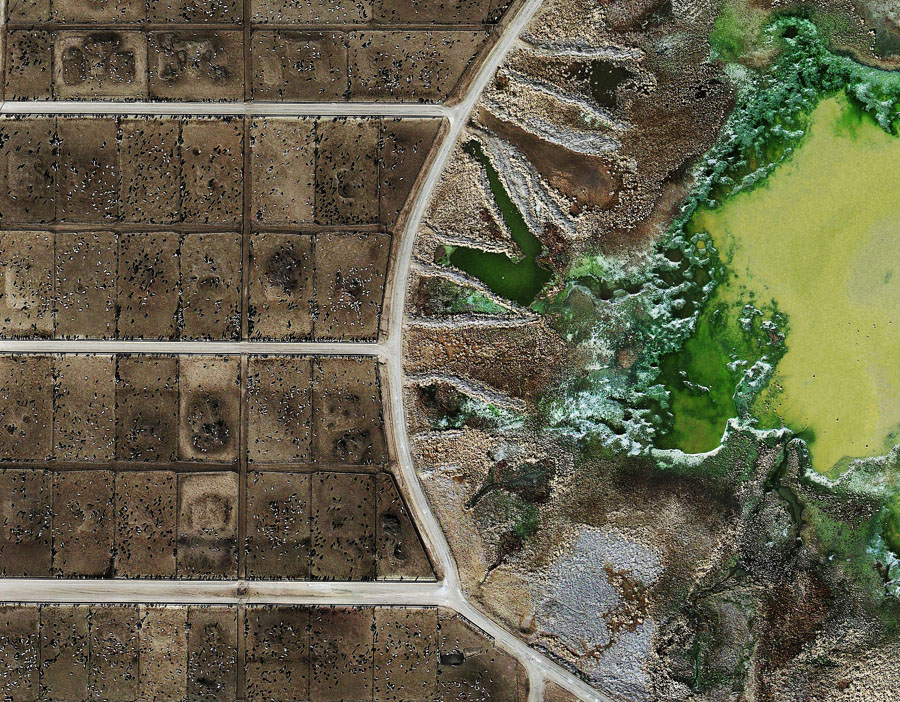 « The feedlots are a brilliant representation of how abstract our food industry has come, » Henner told Business Insider. « It’s an efficient system for extracting the maximum yield from animals. That’s the world we live in now. We want to extract the maximum yield from everything, no matter what business you are in. »

As you can see from these photos, the chemicals in animal waste turn feedlots into oddly beautiful, multicolored cesspools. Henner’s work has been collected into a study called Feedlots, prints of which can be purchased here. Henner will be displaying the work 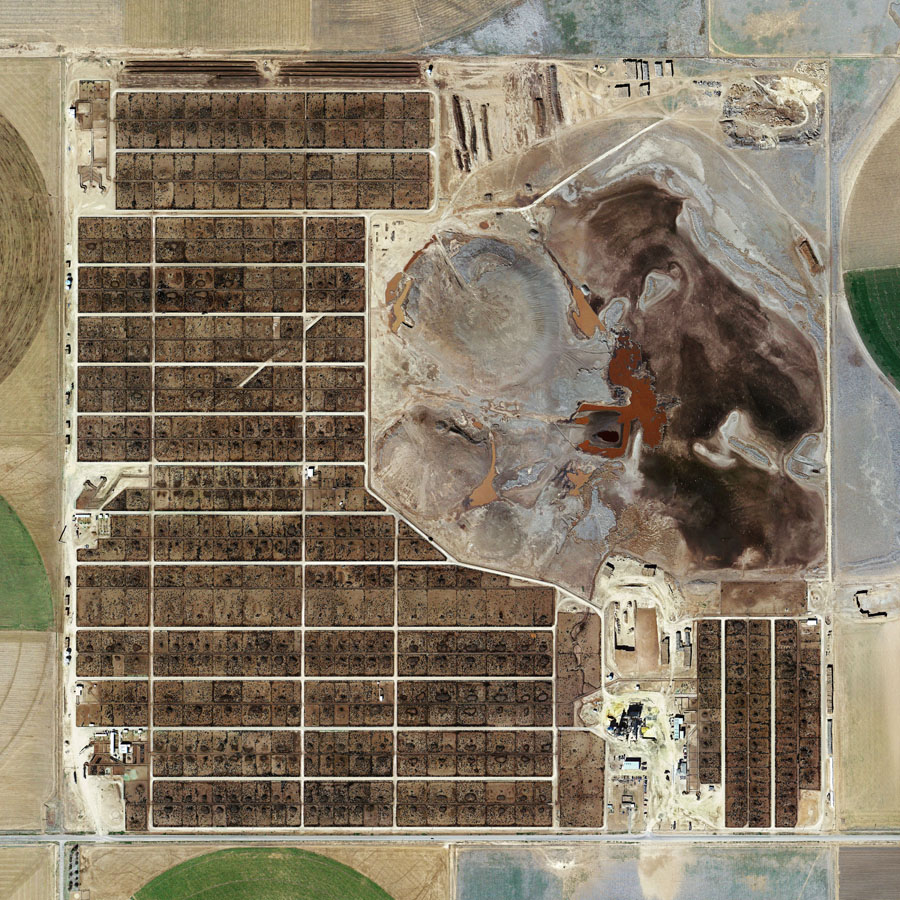 The goal of the feedlots is to produce the greatest output at the lowest cost. To that end, cows eat a combination of cheap corn, protein, and fat supplements (often manufactured from other cows), and drugs to fatten them up quickly and efficiently, according to Pollan. Cows naturally feed on grass, but grass-fed cows take much longer than corn-fed cows to get to slaughter weight.

“Cows raised on grass simply take longer to reach slaughter weight than cows raised on a richer diet, and for half a century now the industry has devoted itself to shortening a beef animal’s allotted span on Earth,” Pollan wrote.

Since factory farms became part of the food industry in the mid-20th century, Pollan writes, the length of cows’ lives before being slaughtered has steadily decreased to 12 to 14 months, from about four to five years.

With meat consumption set to rise exponentially in the coming years, these feedlots will only increase their dominance on our production of food. And these CAFOs have serious environmental costs.

Thousands of of cattle on a small parcel of land produce an exorbitant amount of waste with nitrogen and phosphorus that would render it useless as a fertilizer. With nowhere for the manure to go, farms must create “manure lagoons” — ponds or reservoirs filled with toxic waste, according to a report by the CDC. As you can see from these photos, these « lagoons » look like gigantic, multicolored petri dishes.

The manure lagoons can hurt water and land quality. Animal waste pollutants, such as nitrogen, phosphorus, organic matter, antibiotics, pesticides, and diseases, leach into the groundwater and land. The EPA estimates that states with high concentrations of CAFOs experience 20 to 30 serious water quality problems per year.

That waste also pollutes the air. Farm workers and nearby residents have reported asthma, headaches, eye irritation, and nausea, apparently as a result of the emissions from the feedlots. The health and environmental concerns have driven down nearby property values, according to a recent study cited by the CDC.

These feedlots are tough to fight because of so-called « ag-gag » laws in seven states, which bar the recording of undercover videos, photographs, or sound recordings at farms. Farms and livestock producers say the laws are aimed at protecting their homes and businesses from intruders, but critics say they have a chilling effect on whistle-blowing or investigative work.

Two « ag-gag » laws are currently being challenged in federal court in Idaho and Utah, according to USA Today.

While Henner trespassed on no lands to produce his images, he says he has been warned his images would fall under « ag-gag » laws in the states where they exist. He has yet to be confronted with any legal challenges.

« Ag-gag » laws are one of the main reasons so few people have seen photos of the feedlots, making Henner’s work all the more unique.(filmforaction.org)