The life and violent times of Griselda Blanco, Pablo Escobar’s feared rival and the most notorious, murderous queen-pin of the Colombian drug wars.

A Bullet for La Tia.   Griselda Blanco de Trujillo  , in a plain white dress, with a rosary in her hand and a hole in her head, was laid to rest in the Jardines Montesacro, a posh cemetery on the south western extreme of Medellin.

She was buried in a gold-finished coffin with a domed lid. Eight tough-looking young men, wearing sneakers, jeans, and sunglasses, carried it from the chapel to the grave site on their shoulders.

Reporters had gathered to witness the end of La Madrina – « the Godmother »- as the Medellin newspapers had been calling Griselda since the 1970s. But they were warned, brusquely, not to approach closely or photograph the scene, even from a distance. They could only stand and marvel at the strange theatrics they were seeing. Some of the boys banged violently on the coffin, others smoked marijuana, and mourners cried « No te vayas, Tia! » and « La buena, Tia! »while a group of mariachis played and sang.

The mourners had arrived in buses from Barrio Antioquia, the neighborhood where Griselda grew up, which remains a stubborn hive of vice and misery in a rapidly pacifying, revitalizing city. They departed at dusk, leaving the ground littered with their empty bottles of aguardiente Colombia’s ubiquitous anise liquor. Some three hundred feet away, in a lush family grave ringed by green marble and shaded by palms, lay Griselda’s onetime friend and apprentice – and eventual mortal enemy- Pablo Escobar.

« Who Killed Griselda? » Q‘hubo, Medellin’s trashy tabloid of record, demanded to know, but no one had any idea, only theories. In the months leading up to Griselda’s murder, the Colombian TV station Caracal had been airing a telenovela about the life and times of Escobar. A ferocious Griselda character had appeared in its early episodes, played by the actress Luces Velasquez.

Some surmised that the program had dredged up bad memories. In Miami during the 1970s and early 1980s, Griselda Blanco and her organization had bombed a house, carried out a double murder with machine guns in a crowded shopping mall, had a man stabbed with a bayonet at the airport, and bled, dismembered, or tortured other victims, nearly all of them Colombians, leaving their remains on roadsides, in canals, and on soccer fields. Her assassins strangled six people in a single home. They shot a man at his son’s wake and a couple in front of their young children; one hit gone awry killed a three-year-old boy. In Columbia she was believed to have murdered, or ordered the murders of, her second husband and his brother, and the father of her youngest son, among others. She had once tried to kill Escobar and failed. She championed -and by some accounts invented- the art of murdering on motorcycles, which last year claimed more than two hundred lives in Medellin, including her own.

It stood to reason that Griselda Blanco, even in her dotage, had people who wanted her dead, and who bristled at being reminded, by a sultry-voiced Luces Velasquez in hats and pearls, that she was still alive.

In the United States, where Griselda had committed her most spectacular crimes and was mythologized as sort of a lady Scarface, it was universally held that her murder had been vengeance. « When you kill so many and hurt so many people like she did, it’s only a matter of time before they find you and try to even the score, » Nelson Andreu, a former Miami homicide detective, told the Miami Herald. « The enemies she had apparently did not forget or forgive her, » concluded Time magazine. Billy Corben, director of the Cocaïne Cowboys documentaries, which had returned Griselda to the public eye in recent years, wrote in his blog that at least one of her victims’ loved ones « held a longstanding grudge. »

But her gangland-style funeral had alerted Q‘hubo and the other Medellin papers to more mundane possibilities. 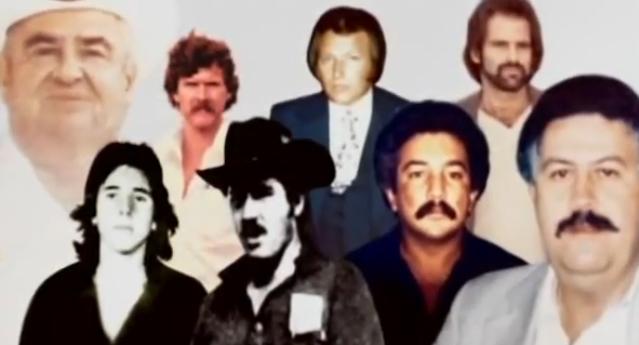 They wondered whether the aging Griselda might have developed ties to one of the small-time drug-trafficking gangs that warred endlessly in Barrio Antioquia. And she had been a property owner, with four buildings in her own name and more under other names; the papers even listed their addresses. May be, they suggested, her murder had something to do with those properties. Or she could have been loan-sharking, a common practice in Medellin. In the week following her death, Medellin police announced that they possessed a security video from the butcher shop where the murder took place, but nothing more was say about.

Minutes before she was fatally shot, at 2:25 in the afternoon on September 3, 2012. Griselda had purchased nearly $200 worth of meat.

She was expecting family in from the United States that same evening, but even in a normal week, Griselda was known to spend heavily on groceries, stocking her freezer and a colossal pantry of snacks. She was a matronly and stout sixty-nine; all her life she had eaten well, and no one left her house without eating.

The butcher shop stood on a corner, open to the street on both sides, in a district adjacent to Barrio Antioquia.

Following her 2004 deportation from the United States, where she served nearly twenty years in prison. Griselda had lived in the tranquil upper-class neighborhood of  El Poblado, in a gated community of American-style ranch houses tucked behind a mall with Montblanc and L’Occitane boutiques. Yet she commuted daily to Barrio Antioquia, where it is easier to find basuco, or cocaïne base, than cappuccino.

Griselda always claimed to feel most comfortable in and around Barrio Antioquia, where the baby-faced thugs called her La Tia. She walked among them wearing diamond pendant earrings. She got her hair done twice a week in an ugly, beat-up salon near the butcher shop, returning twice again for touch-ups.

Griselda was sitting on the butcher shop’s bench counting her plastic bags full of meat when her killer, a man who looked to be in his thirties, pulled up on a motorcycle without plates. Without removing his helmet, he shot Griselda twice- once in the forehead and once in the shoulder – before getting back on the motorcycle and driving away. She collapsed onto her side and began bleeding heavily.

The newspapers wrote of one curious detail: A young pregnant woman, said to be a daughter-in-law or ex-daughter in law of Griselda, had come with her to buy meat.

The same woman, the newspapers said, placed a Bible on Griselda’s chest as she lay dying. It was a gesture that seemed more macabre to me than poignant.

This story was written using published sources–articles, books, and videos, both in English and Spanish–and original interviews with acquaintances, including friends, former employees, and tenants of Griselda Blanco, as well as with journalists and academies in Colombia and the United States.

In some cases, particularly with Colombian acquaintances of Griselda’s living bath in and outside of Colombia, I have deliberately left sources unnamed, for safety reasons. I changed the names of one source and of the three individuals who lived in Griselda Blanco’s house after her death.

Unpublished video of Griselda by filmmaker Jared Valentine proved essential in the construction of this story.

While Griselda herself could be considered an unreliable source at best, the interviews she and her son Michael gave offered much previously unknown information on her life and career, much of it ultimately corroborable.

Among published sources in Spanish, one nonfiction book, La Patrona de Pablo Escobar, by José Guarnizo (Planeta, 2012), contained a wealth of new information on Griselda’s Medellin career in the 1970s and her life upon returning to the city. Another nonfiction book about Griselda, La Viuda Negra, by Colombian journalist Martha Soto (Intermedio, 2013), proved important in reconstructing Griselda’s murder, as Soto was the only reporter to gain access to the medical examiner’s report and the security video from the butcher shop.

I also consulted a number of published English-language sources, including in-depth articles by Frank Alvarado, in the Miami New Times, and Elaine Carey, in Points, the blog of the Alcohol and Drugs History Society. Carey also shared with me information about Griselda that will apear in her forthcoming history of women in the drug tracte, Selling Is More of a Habit (University of New Mexico Press, 2014).

Frances Robles and James Bargent provided important early reporting on Griselda’s murder in the Miami Herald. The books The Godmother, by Richard Smitten (Pocket Books, 1990), Kings of Cocaïne, by Guy Gugliotta and Jeff Leen (Simon & Schuster, 1989), and The Man Who Made It Snow, by Max Mermelstein (Pocket Books, 1990), offered additional background. I also consulted the Cocaïne Cowboys films, by Billy Cor ben and Alfred Spellman (2006 and 2008), and The Godmother, a 2012 A&E documentary.