Interview. Paolo Roversi (b.1947) is Italian-born but lives and works in Paris. He began his career by assisting the fashion photographer Laurence Sackman and has since worked consistently in fashion, both editorial and advertising. From the early 1980s Roversi has used large-format Polaroid film for most of his photographs, both colour and black-and-white. His use of the Polaroid, and his preference for the studio, has resulted in portraits that are both tender and respectful. Informed by a wide knowledge of the history of photography, they are sometimes closer to work of the nineteenth century than contemporary fashion.

Mr. Roversi, you have taken nude pictures of many of the most beautiful girls in the world. How do you convince them to take their clothes off?

It was never a big problem because they are not girls working in a place where it’s unusual to be nude, like an office. It’s not so complicated because we have a confidence between us. Some guests said no, of course. Some said no because, “My boyfriend doesn’t want me to,” or “I’m too shy.” But sometimes they say this and then six months later she’s ready to do it. Then others are never ready. Then some come and ask me! And I think, “Oh, why not. Maybe it’s good.” So there are really no rules. Except when they’re too young, under 18, then I call the parents to ask their permission to take a nude of their daughter.

How does that work out?

Do you talk to the father or the mother?

It depends. For Laetitia Casta I talked to the mother. Sometimes I talk to the father. But this has only happened a few times, not many times.

The girls in your nudes always look so relaxed and comfortable in front of the camera. How do you reach that state?

Most of the time it’s just me and them. Sometimes my assistant is there to charge the camera or something, but I’ve done so many shoots and every shoot has a different feel. My photography is more subtraction than addition. I always try to take off things. We all have a sort of mask of expression. You say goodbye, you smile, you are scared. I try to take all these masks away and little by little subtract until you have something pure left. A kind of abandon, a kind of absence. It looks like an absence, but in fact when there is this emptiness I think the interior beauty comes out. This is my technique. Or at least it’s what I think my technique is! 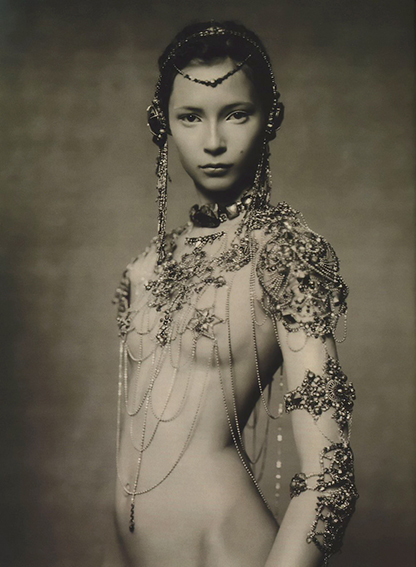 What part of a woman’s body fascinates you the most?

The eyes are really the most expressive part of the body for me, but the hands are very important, too. And then the lips, the mouth is very important. But the eyes are by far the key. I think in a picture, if the look is wrong, then the picture is not good for me. Except if they have their eyes closed or something like this, but even the eyes closed could be very important; it could be a good look. But it should be something.

Your nudes are obviously focused on the body, but you are most famous for your fashion photography. How difficult is it to take a picture if the clothes the model is wearing don’t appeal to you?

When you plan a photo shoot, do you structure everything or do you leave a lot open for improvisation when everyone gets together?

Oui, oui. When I’m having a shoot, in the morning the model is arriving from the hotel, the hairdresser is coming from London, a lot of different moods – one is happy, one is crying, one is angry, one is – I don’t know what – sleeping. And even if you have a precise idea of what you want to do, you can’t. Everyone is coming in with all this different energy and you have to deal with them. So you never know what you’ll do in the end. And this I like. I like the accidents, the things that happen by chance. I let the life come to the picture and the creativity flow.

What makes you want to take pictures? Can it be anything?

Do you take a lot of pictures when you’re not in your studio?

I’m not the kind of photographer who always has a camera around his neck, always taking pictures of everything, with the fear of losing the moment. My life is full of pictures I didn’t take, or that I just took with my mind because I wasn’t fast enough with the camera. Maybe one day I’ll write a book about the pictures I didn’t take. (Laughs)

What is a photographer’s role in fashion these days?

Well I think it’s shifted because now there are many more photographers. And the use of photography has changed, too. Before the images were in magazines and books and now they are on the internet and on the screens. So the use of the image has changed completely. Everything is going much faster and everyone can be a photographer. You can buy a camera and take a picture and everyone around the world can see your picture. You have a large audience immediately. That changed a lot. Don’t you think so?

Definitely. The digital age is changing most of the ways we consume media.

Look at what you have in your hands (iPad); that changes everything.

Do you still shoot with 8×10 Polaroids, the camera that every photographer connects with your photos?

Oui. Less and less because the film isn’t made anymore. So I work with them now, but when the film is gone then it’s the end of the game.

I bought everything I could find, but I can’t find anything anymore. Even if I did, now they are pretty old so they’re not good anymore.

How is that for a shift? You’ve been using that film for so many years, it’s your signature thing. What are you planning on transitioning to?

Exhales. (Laughs) I’m not planning. I’m still working. Sometimes I work with digital, but I don’t like to much. It’s difficult for me to work with digital. I’ve always tried working with very different cameras and I was never attached to one. Of course, 8×10 Polaroid was a camera I’ve used more and I like it very much, but I can survive. (The Talk)