The Complexities of Human Love 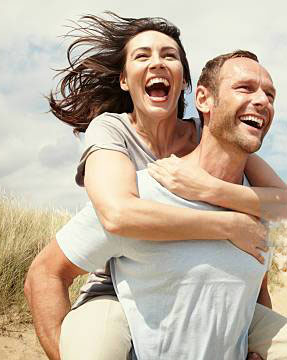 Tech may not be responsible for all the woes of modern love and human connection—but it may reflect our innate desire to find simple solutions to complex problems.

Dating apps show us what we want—a relationship—without always accurately reflecting the experience of it. Our expectation that tech will create anything more than opportunities for social connectedness may overlook the hard work of coexisting with another human being.

A conversation with University of Kansas social psychologist Omri Gillath helps us parse the divide between what tech promises and how it satisfies our emotional needs.

Rebecca Rashid: Arthur, the real reason I don’t use dating apps is because I don’t want to go about my love life in the same way I do playing some game on my phone.

Arthur C. Brooks: You don’t want to use the same technology that you would for goofing around while waiting for the bus that you do to find your actual life partner, because it seems so incredibly important to you.

Rashid: I almost feel like I’m cheating to get to a human being, someone who I know is going to inevitably be far more complicated and emotional. And the act of finding the person seems so diametrically opposed to what the experience of being with that person would actually be like.

Brooks: This is How to Build a Happy Life. I’m Arthur Brooks, Harvard professor and contributing writer at The Atlantic.

Rashid: And I’m Rebecca Rashid, a producer at The Atlantic.

Brooks: Many of my students have told me that there’s kind of an irony about dating these days. They can get anything they want as consumers at the drop of a hat. Look, you want a hippopotamus delivered to your house? You can practically get it from Amazon Prime. But a lot of the same people who are amazed at that will confess that their dating lives are pretty dry. They’ll often say they don’t know how to date in the right way, where it can be actually successful.

They don’t know what the right procedure actually is, or they’re afraid of what will happen if they put their heart on the line. What explains this incredible irony, where there’s easier access to people all over the world, but at the same time, people are either less prepared or more afraid to engage in love behaviors?

Brooks: Today, we want to explore whether romance facilitated by technology has delivered on its promises and what it means to actually put the work into love.

I believe a lot of emotional dissatisfaction in modern dating can be explained by research. There’s data showing technology-mediated relationships fall secondary to in-person interaction.

Other research suggests that romantic love can blossom when people explore their differences—something I fear dating apps often discourage. It concerns me that many of these apps favor selecting romantic partners based on similar traits rather than complementary traits.

I recognize that technology can create opportunities to connect, and that there is research showing the success of online connections after they jump off the screen. But I also want to examine the potential hazards of the limitless nature of tech, reducing human beings to options, and perhaps even encouraging a certain degree of socially sanctioned game playing.

Brooks: I sat down with Omri Gillath to identify the satisfaction gap between what tech promises and what it often delivers.

Gillath: There’s so many people now that are lonely, that are looking for love but can’t find it. When they find it, they can’t stick with it. And it’s definitely something that we’re trying to understand and figure out the underlying mechanism of, and kind of trying to figure out what happened.

Gillath: So what we find when you’re self-disclosing—and you talk about your fears, your dreams, your fantasies, your secrets, all of these things, to people face to face, in person—it usually increases intimacy, increases satisfaction, helps you build the relationship. People are actually over time getting closer.

However, if you do the same thing online, it has the opposite effect. And basically, by “people,” we’re talking about you as a person, and your partner, having a lower level of intimacy, lower level of satisfaction. You kind of feel like you’re left out, right? We can sit together in the same room, and you can tell me something or you can email it to me. And the effect is going to be very different.

I think technology can be very helpful with, for example, filtering up to the first date. But after the first date, it’s got to be in person. It’s got to be face to face. You’ve got to be able to smell the other person, see their body language. You know, we have, for example, research on flirting. It’s so much easier to flirt face to face than to do it behind a computer. I think that we’re happy to rely on technology; we’re happy to even use it as replacements.

Brooks: I mean, is tech going to kill love dead?

Brooks: I want to offer up a sort of new framework to think about tech and dating apps and their role in facilitating romantic connections. This is, oddly, a sort of business-school approach to problem-solving, but hear me out.

There are two kinds of problems in life: complicated problems and complex problems. They sound like the same thing, but they aren’t.

Complicated problems in life are problems that are hard to solve. But, once you solve them, you can replicate the solution over and over, like making a toaster. You can get one at Walmart for $20, and it will be your toaster for the next 20 years. It’s unbelievable. It’s human genius.

Well, all the really interesting problems in life—all the things we really care about—are not about good toast. They’re about human love. These are what we call complex problems.

A complex problem is like your relationship with your cat. It wants kibble and a scratch and warmth and to go out from time to time. But you never know what it’s going to do, and that’s because you can’t really simulate the cat.

Here’s the problem with tech in a nutshell, in my opinion. We want cats. But the technology itself just gives us toasters—again and again and again. Tech tends to take complex problems like human love and treat it as if it were a complicated problem of trying to solve a bunch of math. And it just doesn’t work that way.

Brooks: So let’s say now that somebody has had some success and is actually dating somebody, fantastic, right? What actually the data say is that by a couple years in, you should be pursuing companionate love over passionate love.

And this gets us to really a huge area where you’ve been the major contributor in social psychology, which is attachment styles. So tell me, what’s the goal when somebody is now paired up?

Gillath: Often the beginning is around passion. Often people are very attracted to someone else. They don’t look at you and say, “Oh, you have an amazing attachment style.”

There are three styles. There is a secure style, which the majority of people are. Then there are people who are avoidant, who don’t want to be committed, don’t want to be limited; they are worried about other people depending on them getting too close and stuff like that. And then there are anxious people. These are people that are all the time preoccupied about being rejected and abandoned.

So when you’re insecure, either avoidant or anxious, everything is harder. The best scenario that can happen is that you find someone who is secure, who is providing you security and can help you shift over the lifespan to becoming more secure than you were at the beginning.

Brooks: I think one of the key points that you’re making along the way here is that you’ve got to do the work. The idea of simplifying procedures on the basis of apps and tech make it easier than it actually really is.

And that’s probably in and of itself doing a disservice, because it says that finding the most important thing in your life is as simple as swiping right. And it isn’t like that at all. And that actually isn’t even helpful for the beginning of a relationship.

Gillath: Right. And relationships always involve work. And, people have this very strong sense of FOMO (fear of missing out)—there’s always something else that we might be missing out on. Maybe a better partner, a more attractive partner or richer partner or a more sexy partner, or what have you. If you live your life with that sense, you are always going to chase the next big thing instead of being happy with what you have and actually enjoying it.

Gillath: Yes, what he said. Absolutely. Everything you said is perfect. In a way, from the moment that we are born, right? If you think about it from an attachment perspective: We have this unconditional love from a mother. Nothing is better than that. We need that; we need someone. And often this “someone” is our romantic partner.

I used to have an English teacher back in high school who said, “It’s better to fall in love and fail than to never fall in love.” And the worst thing that people can do is hide behind all these screens. And then they find out that this one-dimensional, uni-dimensional life is not fulfilling and is depressing, and it’s something that you got to be aware of. You have to be prepared to deal with the consequences.

Brooks: Thank you to our How To listeners who make this show what it is. We asked: When was the last time you confessed romantic feelings for someone? And here’s what you said:

Shawn: My husband of many years passed away unexpectedly almost four years ago now. And so I have found myself in the dating pool after about 20 years of being out of it. Actually just last week I had reconnected with somebody I dated shortly after my husband died, and it wasn’t a fit timing-wise. And then we reconnected again a couple of months ago.

About a week and a half ago, we had a conversation in which we said, oh, well, maybe, maybe things are getting a little too serious. And after we agreed that it would be good for us to each take some space, I felt so sad. And as I investigated my sadness, I realized that I had fallen in love with him and that I needed to tell him this. And so I did. I told him, and he felt/feels the same way. My name is Shawn and I live in British Columbia, Canada.

Brooks: What a wonderful example of how humans are different than machines. She had to interrogate her feelings about why she felt so sad; there’s no algorithm that’s going to tell her that. She had to muster up the courage to go tell the man that she’s falling in love with him. That’s uniquely, weirdly, human. One last note, I hope Shawn and that man get together, because happiness is love.