Environment. This Tower Purifies a Million Cubic Feet of Air an Hour

THERE’S A MASSIVE vacuum cleaner in the middle of a Rotterdam park and it’s sucking all the smog out of the air. A decent portion of it, anyway. And it isn’t a vacuum, exactly. It looks nothing like a Dyson or a Hoover. It’s probably more accurate to describe it as the world’s largest air purifier.

The Smog Free Tower, as it’s called, is a collaboration between Dutch designer Daan Roosegaarde, Delft Technology University researcher Bob Ursem, and European Nano Solutions, a green tech company in the Netherlands. The metal tower, nearly 23 feet tall, can purify up to 1 million cubic feet of air every hour. To put that in perspective, the Smog Free Tower would need just 10 hours to purify enough air to fill Madison Square Garden. “When this baby is up and running for the day you can clean a small neighborhood,” says Roosegaarde. 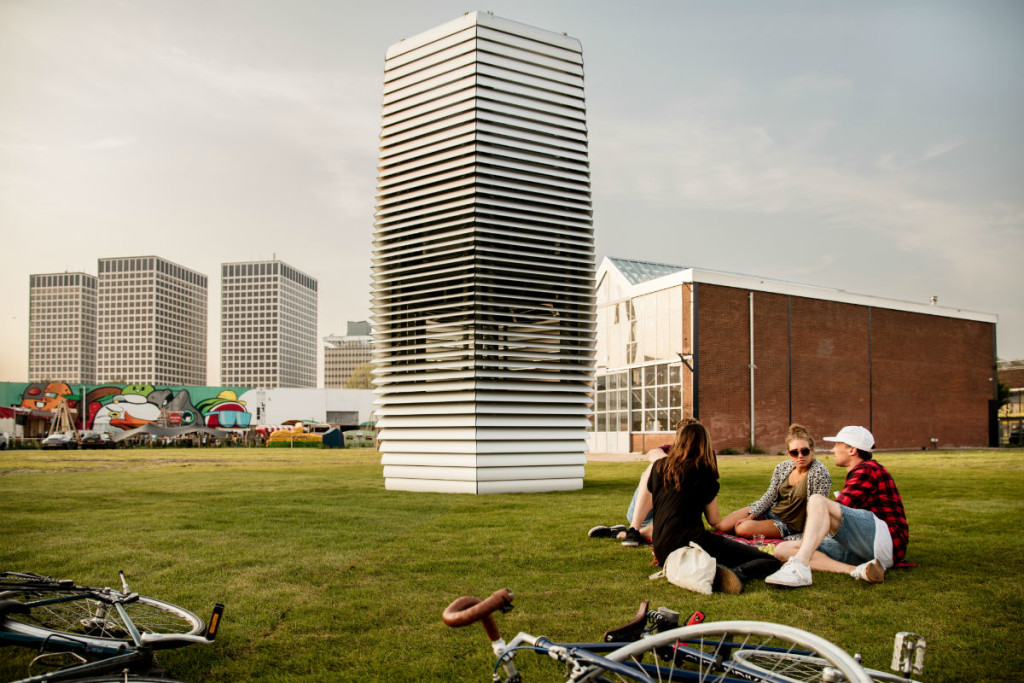 It does this by ionizing airborne smog particles. Particles smaller than 10 micrometers in diameter (about the width of a cotton fiber) are tiny enough to inhale and can be harmful to the heart and lungs. Ursem, who has been researching ionization since the early 2000s, says a radial ventilation system at the top of the tower (powered by wind energy) draws in dirty air, which enters a chamber where particles smaller than 15 micrometers are given a positive charge. Like iron shavings drawn to a magnet, the the positively charged particles attach themselves to a grounded counter electrode in the chamber. The clean air is then expelled through vents in the lower part of the tower, surrounding the structure in a bubble of clean air. Ursem notes that this process doesn’t produce ozone, like many other ionic air purifiers, because the particles are charged with positive voltage rather than a negative.

“The proposed technology, while not new, would need to be well demonstrated on a large scale in a highly polluted urban area,” says Eileen McCauley, a manager in the California Air Resources Board’s research division. She adds that there are concerns around efficacy and logistics like how often something like this would need to be cleaned. But Ursem himself has used the same technique in hospital purification systems, parking garages, and along roadsides. Still the tower is by far the biggest and prettiest application of his technology.

Indeed, it’s meant to be a design object as much as a technological innovation. Roosegaarde is known for wacky, socially conscious design projects—he’s the same guy who did the glowing Smart Highway in the Netherlands. He says making the tower beautiful brings widespread attention to a problem typically hidden behind bureaucracy. “I’m tired of design being about chairs, tables, lamps, new cars, and new watches,” he says. “It’s boring, we have enough of this stuff. Let’s focus on the real issues in life.”

Roosegaarde has been working with Ursem and ENS, the company that fabricated the tower, for two years to bring it into existence, and now that it’s up and running, he says people are intrigued. He just returned from Mumbai where he spoke to city officials about installing a similar tower in a park, and officials in Mexico City, Paris, and Beijing (the smoggy city that inspired the project) also are interested. “We’ve gotten a lot of requests from property developers who want to place it in a few filthy rich neighborhoods of course, and I tend to say no to these right now,” he says. “I think that it should be in a public space.”

Roosegaarde has plans to take the tower on a “smog-free tour” in the coming year so he can demonstrate the tower’s abilities in cities around the world. It’s a little bit of showmanship that he hopes will garner even more attention for the machine, which he calls a “shrine-like temple of clean air.” Roosegaarde admits that his tower isn’t a final solution for cleaning a city’s air. “The real solution everybody knows,” he says, adding that it’s more systematic than clearing a hole of clean air in the sky. He views the Smog Free tower as an initial step in a bottom-up approach to cleaner air, with citizens acting as the driving force. “How can we create a city where in 10 years these towers aren’t necessary anymore?” he says. “This is the bridge towards the solution.”