NewTech. Viktor is a drawing machine created by artist and designer Jürg Lehni in collaboration with German electronics developer Defekt.

BLACK SCREEN. It looks something like an Etch-a-Sketch built by SkyNet, but it’s much more than a fancy pen plotter: It’s an investigation into the intersection of hardware, code, and expression. Viktor is a visceral connection between creative process and product that Lehni designed to bring out the human element in our digital tools.

“In a way, the inspiration comes from observing older devices, like old plotting machines, or working with older computers where technology was unintentionally transparent,” says Berlin-based Lehni. “I want to find a way back to that state where technology seems open and friendly and inviting to create things with, rather than what we now face: this shiny surface with no way to understand what’s going on behind it.”

It’s true that a lot of today’s technology looks and feels more like a crystal ball than any kind of human-made machine. As seams get sealed and interfaces become ever more refined, digital creators can find themselves out of touch with what takes place between pressing a button and the result that emerges. Of course, that’s not necessarily bad, but something may be lost as the rattle and hum of technology fades—a relationship between user and tool, between idea, process, and result. In addition to being less complex, the workings of earlier technology were morevisible, with moving parts that demonstrated the pragmatic solutions applied to various engineering problems, minute imperfections that add up to something seemingly alive with a bit of “almost-human” error.

Viktor embodies the philosophy of keeping creative technologies accessible and relatable. Its physical elements are laid out in plain view — a metal reticule is slung up on four belt straps, each connected to stepper motors at the outer corners of a square that can be stretched as wide as 20 meters (about 65.5 feet). When drawing or writing, the motors pull their respective cables in concert to glide Viktor’s mechanical “hand” across the board in deliberate swoops. 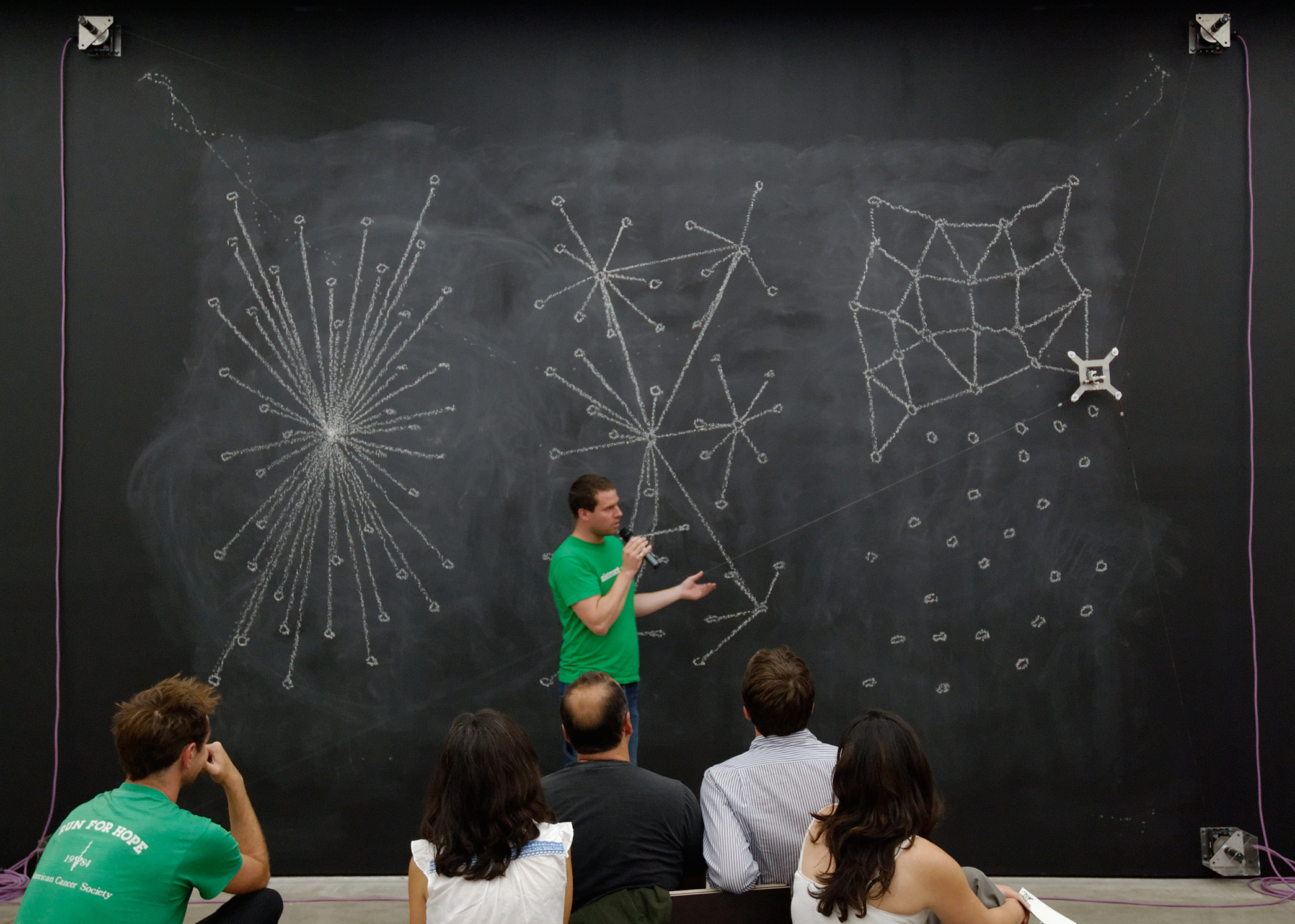 These two photos show Viktor illustrating engineer Paul Baran’s network diagrams to accompany Leila McAlister’s presentation on alternative distribution models for locally produced food. It was part of A Recent History of Writing and Drawing, a collaboration between Jürg Lehni and Alex Rich at the Institute of Contemporary Arts in London.

You’ll find Viktor and its sibling drawing machines Rita, Hektor, and Otto making their marks in art installations and accompanying lectures, adding a spellbinding visual dimension to the familiar beat-and-scratch sounds of the grade-school classroom. Wobbling ever so slightly as it lifts and drops its bit of chalk to make lines, Viktor sketches in arcs and curves that resolve themselves into clear illustrations or stylized strings of words. Viktor’s slightly wonky writing style is key to its personality, a personality that makes for a bit of unpredictability and spontaneity. Lehni describes the character of the machines he builds as being largely outside of his control: Until you turn it on, there’s no telling how it will behave, what little quirks and idiosyncrasies will emerge. “Frankenstein moment” is his term for the first flip of the “on” switch, when these behaviors finally emerge.

“That’s what I’m striving for, I think; that moment where it all comes together and starts vibrating,” he says. “It’s only after you’ve programmed it and given it behavior that you can discover its character. And although you created it, the character is coming not just from you. It’s more like it’s coming from the collection of all these components: physical constraints, the struggle with gravity, how the motor you’ve chosen sounds, or some unforeseen physical or mechanical problem that you need to overcome.”

DIARY OF A YOUNG ROBOT

In college, Lehni made the shift from studying computer code to studying art. His interests centered on examining relationships between technology and creativity, and how to keep it a two-way relationship. In 2001, Lehni wrote Scriptographer, an open source plug-in for Adobe Illustrator that allows users to code their own drawing tools in simple Javascript. He’s since created a similar browser-based version called Paper.JS, and while the former inspired the creation of Lehni’s writing machines as an effort to “break out” of the computer monitor, both have been used to generate the imagery drawn by Viktor and its kin.

Like Viktor, the Illustrator and web-based software are medium and message, intended to stimulate a feeling of connection between users and their tools. In the case of Scriptographer, connecting the creative acts of coding and drawing; in the case of Viktor, linking the creation that takes place on a computer screen with its realization in the real world. These represent one of the driving principles in Lehni’s work—the notion that technology be developed in a way that allows it to serve as an open platform on which all are empowered to influence the tools they use, rather than just the other way around.

“For me, Scriptographer was a comment on the role of Adobe in the design world,” says Lehni. “A lot of the students I studied with were celebrating the vector graphics aesthetic, and not many of them were aware of the role of the hardware that they were using. They all made similar work because they used the same tools. So Hektor was sort of the next step, where I was asking the question, ‘What if I were to make my own printer, rather than taking one that exists, or printing on a laser like everyone else?’”

uilt in 2002 as part of Lehni’s diploma project at École cantonale dʼart de Lausanne, Hektor looks a lot like his younger siblings, especially Viktor and Otto. (Otto is the latest, built for use by the Long Now Foundation’s salon space, The Interval). Originally built with four stepper motors, Hektor was fraught with syncing problems that led Lehni and engineer Uli Franke to drop the number to two. This simplified the works but reduced stability.

To keep Hektor’s writing smooth, they developed an algorithm that taught the machine to account for and incorporate gravity into every angle of every chalk-stroke. The diagrams that show the gravity-conscious paths the mechanical hand traces in drawing the alphabet look remarkably like childhood handwriting guides, a representation of physics in the code world that in turn informs mechanical actions in the physical one. Such gestures emerging from the digital/physical divide are critical to the handwriting style of all of Lehni’s writing machines.

“That’s what I like about these kind of works, that you switch back and forth, and even in their output they’re all about that friction between the digital and the analog,” says Lehni. “All these machines are performative devices. People love watching them doing their work, and it’s as much about the final drawing as it is about the drawing in creation, where there’s a sort of storytelling happening.”