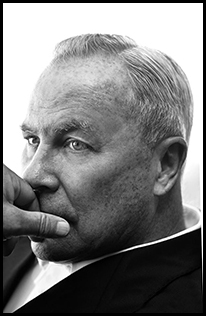 Avant-garde. Robert Wilson (born October 4, 1941) is an American experimental theater stage director and playwright who has been described by the media as « [America]’s — or even the world’s — foremost avant-garde ‘theater artist' ». Over the course of his wide-ranging career, he has also worked as a choreographer, performer, painter,sculptor, video artist, and sound and lighting designer.

Mr. Wilson, you grew up in pre-civil rights era Texas in a very conservative family. How did you go from that background to becoming one of the most respected avant-garde theater directors in the world?

I would come home from school, go to my room, and close my door and lock it. I was not interested in playing with the other kids in the neighbourhood. I was perfectly content to be alone. My mother died at quite a young age – she was about 57 – and shortly before she died she said, “You’ll get along just fine in this world.” I asked her why and she said “Because you know how to be alone.” It’s very curious that I ended up working in the theater where you’re responsible for and you work with many people, but it’s no problem for me. I go away for a few weeks at Christmas and New Year’s, and I stay totally isolated. People say, “Well, do you really want to be alone on Christmas and New Year’s?” and I say, “Yes!”

When did you start constructing your own world?

I was about six or seven, and I had buried about 100 soup cans in the ground in the backyard of my parents’ house. And I put white sticks in the soup cans. (Laughs) I did it when my parents had gone on a weekend vacation and they came back and the backyard was full of all of these white sticks that were about three meters high. So that still has a very strong impression on me, those images come back many times in other works.

How did your parents react?

Tom Waits once said, “Nobody walks away from working with Robert Wilson without having completely changed.” If you are such a loner by nature, why are you so sensitive in interacting with others?

Well, I grew up in a community that was ultra conservative, right wing. Full of religious fanatics, and Seventh Day Adventists, Southern Baptists, you know, it was a sin for women to wear pants, it was a sin to go to the theater. It was a disgrace that Abraham Lincoln, the President of the United States, was assassinated in the theater. The theater was a house of ill repute. It was immoral to go to the theater. It was a very racist community. You couldn’t walk down the street with a black man, you couldn’t go to the same public toilet, there was a blacks’ toilet and a whites’ toilet. And the public drinking fountain: there was whites-only drinking water. So, I think I was very concerned about social justice from a very young age. I was very disturbed growing up in this community, and I think that’s been deeply rooted in all of my work. As you know, my first major work in the theater was written with a 13-year-old Afro-American boy who had never been to school and knew no words and was deaf.

You even ended up adopting him as your son.

It was in ’67 and I was gay, single, and 27 years old. I wasn’t particularly interested in having a son, but it happened by accident. I was walking down the street in New Jersey and I saw a policeman about to hit the boy over the head with a club. I grabbed the arm of the policeman and said, “Why do you hit the boy?” The policeman said, “None of your business.” I said, “But it is. I’m a responsible citizen, why do you hit this boy?” He had no legal guardian and I didn’t want to see him institutionalized. Society thought that he couldn’t learn. But my life changed living with this kid. I thought he was intelligent, perhaps highly intelligent. Then it became apparent that he thought in signs and signals: that was the beginning of everything for me.

How has your lack of a traditional theater education influenced your work?

Well, if I had studied theater, I would not be making the kind of theater that I’m making. My theater came about by living. My first play that had text was written with another 13-year-old young man named Christopher Knowles who spent 11 years of his life in an institution for brain damaged children and was composing text that were arranged mathematically and had to do with geometry. I was fascinated by his mind and the way he was putting words together. Not only was it interesting to hear, but it was also very interesting to see. It wouldn’t be necessarily right for someone else, but for me it was something I was drawn to. It came about by living, not by reading a book.

So how do you begin constructing a play?

I usually start with a structure. The structure is quite rigid. So I have a strong form or frame. A work like Einstein on the Beach is like that: Act One, Two, Three, Four. Act One is A and B. Act Two is C and A. Act Three is B and C. And Act Four is all three together, A, B, and C. So, I knew it was going to be based on theme and variation, and once I get that, I can be freer to fill in the form. Without it, I don’t know how to fill it in – it’s like an architect builds an apartment building: you can live in the building, I can live in the building, other people can live in the building. They each have their apartment to their own liking, but the building has a cohesion because the architect has built it.

How many projects do you work on at one time?

Well, this summer I’ve worked on 13 different projects. I know it sounds crazy, but you go from one project to the next. My projects are always very different. One season I did Shakespeare – I did King Lear, I did Chekhov, I did Heiner Müller, I did Hamburg, I did William Burroughs and Tom Waits, I did Virginia Woolf’s Orlando. They’re totally different worlds. I once did back-to-back Lou Reed with Luigi Nono’s Prometeo. Lou is about loudness. I learned to appreciate the loudness of music and sound from working with Lou. Nono is about the quietness of sound and listening in a totally different way, so somehow I appreciated the quietness of Nono after having just come from Lou’s very aggressive music.

There is a story that you told Martha Graham that you had no idea what you wanted to do and Graham told you that if you worked long and hard enough you would find your purpose as an artist. Have you?

What does theater have to do to remain current in our fast-paced, ever-connected society?

Theater is something live, so it’s always something exciting. There’s that risk, that danger that something might fail, something might not work. And some people are looking for an alternative to the media and the mass electronic world. So much of the theater that we have now reminds me of television: most directors, most actors say something for the people to understand. They say this, and you’re supposed to understand what it is that you’re saying and what you’re doing. It’s okay to get lost! When I did Einstein, there was nothing for the audience to hang on to.

True, the first 20 minutes of Einstein on the Beach I was quite surprised, but then I just let go and enjoyed it – a very special experience.

For the most part people stayed for five hours and could get lost in the situation where they were experiencing something. To experience something is a way of thinking, as Susan Sontag said. I think a lot of the people that come to my plays are looking for an alternative. And theater can do that, it can be something very different from everything else that’s going on in our busy lives we have today.

How does it feel when a play is not well received at the premiere and you have to stage it again and again knowing that the people will probably not like it?

It’s strange. I once did a work in Judson Church many years ago where only one person came to the theater. He was an old man, and about halfway through he left. (Laughs)

Did you stop playing or did you finish?

No, I finished! I also did The Life and Times of Joseph Stalin in Copenhagen. It was a 12-hour play, it went from seven in the evening to seven in the morning, and we were supposed to do ten performances. And on the third performance, at two in the morning someone came backstage and said, “There’s no one in the audience! They’ve all gone!” We had 128 people performing and even all of their girlfriends and boyfriends left! They asked, “What do we do?” I said, “Well, we keep performing! We have 128 people performing!”

So when is something a success for you?

I don’t know. You try not to think about it. I learned a long time ago that you always have the next project in mind. You just go from one project to the next. It’s always a surprise. I did this piece last year, a year-and-a-half ago or something…called The Old Woman, and I kept thinking, “This is the worst thing I’ve ever done in my life!” But it had this huge success. You never know. Just keep working. Diana Vreeland said it right: “Some years they love you, and some years they hate you. It doesn’t matter: just keep working!” (Talks)