Geneva Writing Conference. Get ready for the 10th 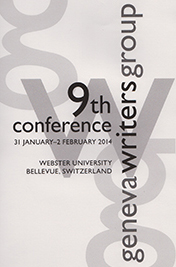 Conference. Geneva, January 10 2014. Every second winter, up to 200 people meet in Geneva to learn… how to be a poet; at least, how to « write » in English. The 9th is just through: two years left to make the 10th edition. But what does it mean exactely, to « learn » how to write… in one’s own tongue ? It is simpler to guess what goes on behind the closed doors of a congress on solid-state physics or dry-land fertilizers than behind the open doors of a « writing » conference. But we were there, if only during a coffee break.

Most attendees of the Geneva conference are native English speaking people (although many live in or not far from Geneva, and some flew in from exotic countries, like Iran). But schooling in English – primary or PhD – does not make a Shakespeare. Neither will the Geneva Writing Conference, which doesn’t claim to trade in miracle cures. But on a table during the break, most instructors and many attendees display their published books, as a token of what successful writing means. The Conference was launched by Susan Tiberghen, who had to wait until she was fifty, with her six children mature, to start her career as a writer. Indeed, she was eager to put in print what she had to say on psychology : she nurtured a passion for Carl-Gustav Jung’s thinking. The Iranian attendee, on the contrary, wants to address a learned audience about… Ibsen’s theatre ! Another attendee said this mix was the main asset of the event : it covers a broad range of writings, from poetry to guides, to digital messages.

As Susan admits, a French audience wouldn’t be as pragmatical on being taught literary talent : what a shame for a Ronsard or Balzac to-be, to get aid from outside. But in a time when school is so much under the fire of the media, « writing conferences » may have a future even for a French minister of culture.

Listen to our interview, and see the website http://genevawritersgroup.org and a nice article here: http://tmagazine.blogs.nytimes.com/2014/02/14/the-writers-room/?module=BlogPost-Title?hp